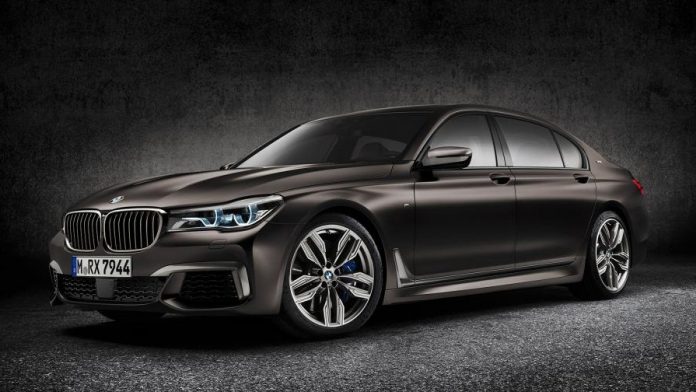 The new G11 BMW 7-Series, locally launched just recently in two trims, has received the BMW M and Alpina treatment, and the results aren’t short of spectacular. Enter the BMW M760i xDrive and Alpina B7 xDrive.

Let’s start with the offering from Munich. The M760i xDrive is now the range-topper for the G11 series, and shares the same engine that powers the Rolls-Royce Wraith. At heart, this Bavarian is propelled by a twin-turbocharged 6.6-litre V12 engine that produces 592 hp at 5,500rpm and 800 Nm of torque from 1,500rpm! The nought to 100km/h sprint is achieved in 3.9 seconds (that’s quicker than the BMW i8’s 4.4 seconds, mind you) while its top speed, as expected of the Germans, is limited to 250km/h.

The xDrive moniker on this car denotes its all-wheel drive system, albeit slightly rear bias. The M760i uses the eight-speed ZF-sourced automatic found in most modern Bimmers and across all current 7-series variants as well.

It also receives M Performance-tuned software to allow this 7-series to be sportier than its other siblings. The quad-exhaust system allows valves to be opened to unleash the visceral glory from its V12 soundtrack.

Though the M760i isn’t quite the M7 we hoped it to be, the limo does come with plenty of sporty upgrades from its M Performance division. This includes M Performance body kit and M Performance inspired interior such as steering, seats, paddles and so on. The M760i is equipped with a set of bespoke 20-inch 5-spoke wheels that make the car all the more alluring.

The other offering comes from Alpina – also a Bavarian tuning expert. Unlike the M760i, the Alpina B7 xDrive settles for a smaller twin-turbocharged 4.4-litre V8 engine, but it’s tuned to make 600 hp and close to 800 Nm of torque! This effectively makes the B7 the fastest car Alpina has produced, a claim its on-road performance can happily attest to.

Together with the eight-speed gearbox (not forgetting to mention Alpina’s signature Switch-Tronic shift buttons), the B7 xDrive rockets from 0 to 100 km/h in 3.6 seconds, whereas the rear-wheel drive variant manages the sprint in 4.0 seconds flat. The top speed on Alpina cars are usually non-restricted, hence it’ll max out at 309 km/h.

The B7 also gets 20-inch Alpina classic wheels as standard, while handling abilities are enhanced via the Driving Dynamic Control (DDC). The DDC doesn’t just allow the driver to switch between Comfort and Sport modes, but it also actively adjusts the car’s chassis. The B7’s adjustable air suspension will act according to data from Road Preview, a feature that uses GPS to detect upcoming corners, allowing the car’s suspension to make adjustments for optimum cornering ability.

No word on the pricing for both cars have been revealed as yet, but the duo are set to make their debut at the Geneva Motor Show in March. So there you have it. Which of the two would you pick; the monstrous V12 M760i or the menacing B7 limo by Alpina?