While everyone is preoccupied with the amazingly futuristic concepts taking the stands at the ongoing Tokyo International Motor Show, Stuttgart-based motoring perfectionist, Porsche has seized the chance to roll out a hot GTS-flavoured Macan SUV that’s slated to sit slap bang in the middle of the Macan S and Macan Turbo models currently on sale.

It’s almost inevitable that Porsche would apply its renowned GTS treatment to the Macan, considering the fact that most of its highly-acclaimed stablemates have received such treatment like the Cayenne, Boxster, Cayman and the daddy-of-them-all – the 911. We’d reckon it was all but a matter time, and in any case we ain’t complainin!

Interestingly this souped-up Macan GTS makes for a brilliant competitor to Bimmer’s recently-launched X4 M40i model which, just like the Macan, is a brilliant range-filler that sits just short of the their forebearers up in the range. With a 360 hp 3.0-litre, twin-turbocharged V6 churning out 500 Nm of twist (on paper at least) the Macan is primed to go head-to-head with the jacked up Bimmer. Having said that, the century sprint is dealt with in 5.2 seconds (5 seconds if you opt for the Sport Chrono pack) while top speed is rated at 257 km/h.

Unlike the Bimmer and a plus point to Porsche is the seven-speed PDK (Porsche Doppelkupplung if you speak Deutsch) ultra-fast dual-clutch gearbox that’s coupled with the company’s signature Porsche Traction Management (PTM) system with variable power distribution. This system sends power to each individual wheel, ensuring that the driver will always have the upper hand when tackling the bends. As if that wasn’t enough, a sports exhaust gives everyone an aural clue to the potency of the heart beating within.

Also, the Macan GTS sits 15mm closer to the ground, thanks to a revised Porsche Active Suspension Management (PASM). The 20-inch RS Spyder design alloy wheels complete the dynamic image of the GTS. Incidentally, the wider tyres on the rear axle that are a unique feature of every Macan affords a particularly purposeful stance to the new model.

On the inside, Porsche has carried over the exterior’s athletic theme with twist of luxury starting with the envelopment of everything Alcantara. Bear in mind however, being a Porsche – personalisation is a word the marque excels with flying colours. The new Porsche Communication Management touchscreen monitor has extended functionalities as first seen in the 911, and now celebrates its debut here in the Macan with Apple CarPlay for good measure.

The Macan GTS is now on sale in the UK and is priced from £55,188 (RM359k). However, given the brand’s massive popularity here in Malaysia, it’s safe to say that the Macan GTS isn’t that much farther away from it’s local debut. 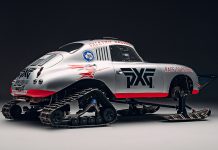