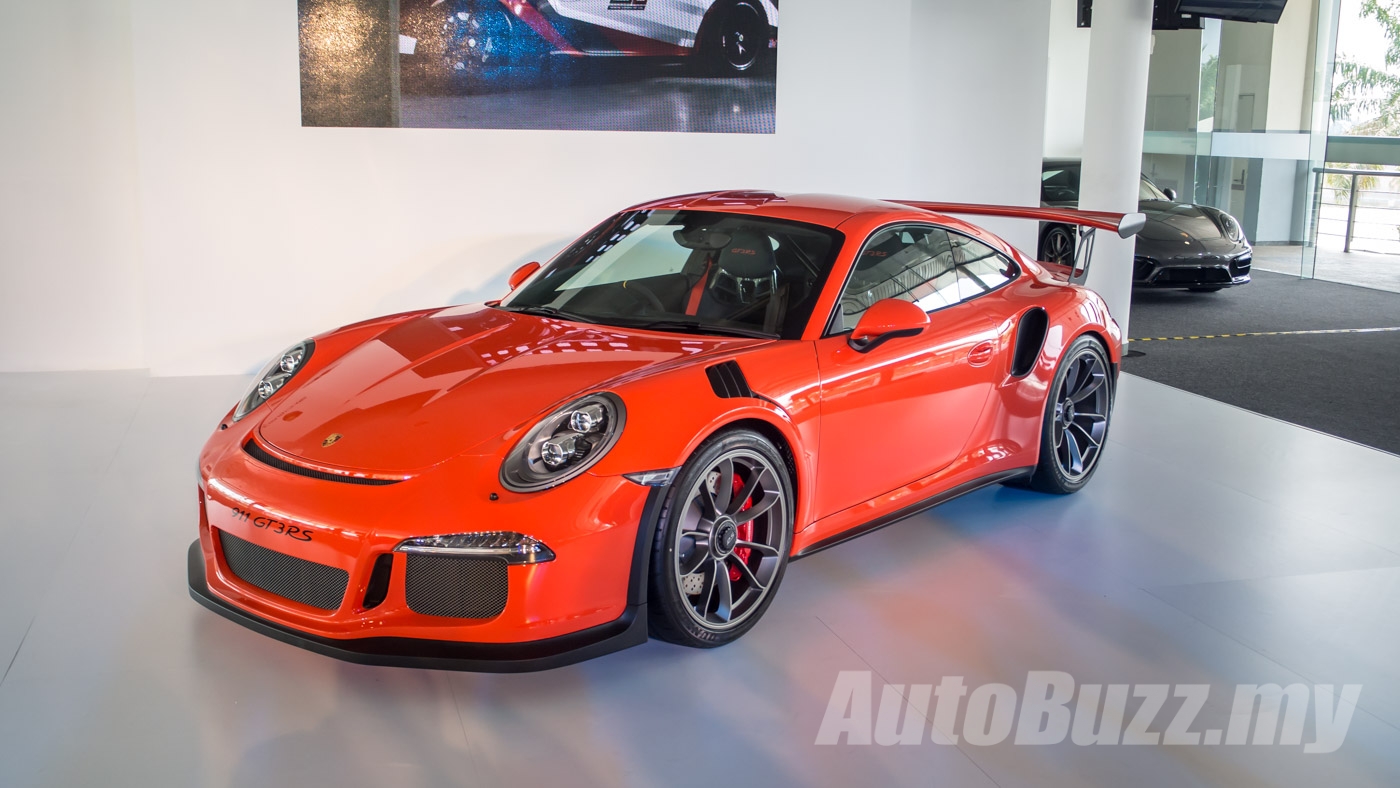 Porsche, through official distributor Sime Darby Auto Performance (SDAP), has launched the hottest 911 to date – the Porsche 911 GT3 RS. The fifth-generation 991 now sits at the top of the 911 range with a base price of RM1.75 million. That excludes insurance and road tax, mind you.

As expected of the RS badge, this particular 911 has about 80 percent the downforce of a GT3 Cup racing car. In pursuit of lightweight and quicker lap times, the GT3 RS now comes with a magnesium roof. Its engine and luggage compartment lids are now made of carbon fibre – making it 10 kg lighter than the 911 GT3.

Now, it’s worth noting that the GT3 RS blazed through the Nurburgring with a lap time of 7 minutes 20 seconds – that’s almost 9 seconds quicker than the Carrera GT! Two of the major contributing factors towards the lap time are of course the powertrain (more on that below) and downforce. Lots of it. In fact, this 911 GT3 RS makes more downforce at 200 km/h than the previous model did at 300 km/h!

Besides the lightweight materials, the 911 Turbo-based track machine gets a unique front spoiler, huge rear wing and side air intakes for better ram-air effect. It also shares the wheels and tyres (wider track width to aid grip) of the 918 Spyder, steering wheel and brakes. Because the tyres are so huge, getting the tyres to fit snugly within the wheel arches was one of the key challenges in completing the car.

The cabin of the GT3 RS is largely similar to that of the GT3, featuring generous use of Alcantara. It gets an entirely new racing bucket seats, and yes, the seats are also based on the carbon fibre bucket seats of the 918 Spyder.

Other standard features here include the Club Sport Package that gives you a bolt-on roll cage, battery master switch and a separately provided six-point safety harness for the driver. Also provided with the GT3 RS is a fire extinguisher housed firmly in its mounting bracket.

Customers wanting more can opt for the Sport Chrono Package that gives you a factory-fitted timer. What this does is, when paired to the Track Precision App on your smartphone, it precisely measures lap times via GPS and logs the data onto your phone. Driving parameters such as vehicle speed, lateral acceleration and deceleration, as well as driving direction.

Powering the GT3 RS is a direct injected 4.0-litre flat six engine that makes 500 horsepower at 8,250 rpm and 460 Nm of torque at 6,250 rpm. The engine is basically the same 3.8-litre unit that drives the GT3, but here it gets a slightly longer stroke, giving you that ever-so-important power increase of 25 hp.

Transmission choice is the sole but highly revered PDK gearbox, and sends all the power to the rear wheels. Acceleration from standstill to 100 km/h takes just 3.3 seconds, and by the time you hit 200 km/h at full gun, only 10.9 seconds passed. Fuel consumption is rated at 12.7 litres per 100 km, but this, you don’t care.

Another couple of interesting features to take note of is the “paddle neutral” function that is similar to pressing the clutch on a manual gearbox. And then there’s the Pit Speed button which lets you limit your speed at the track. Nifty, but a welcoming feature nonetheless.

The base price for this 911 GT3 RS starts from RM1.75 million, and packaged along with your purchase is a 4-year factory warranty. That’s not even inclusive of registration fee, road tax, insurance and the long list of accessories! However, at press time, over 20 units of the GT3 RS have been sold.