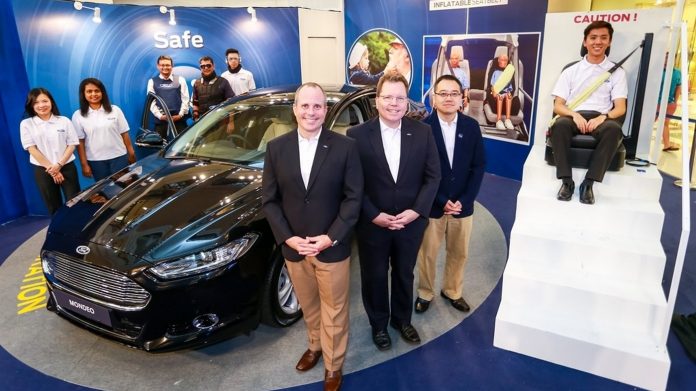 The Blue Oval Company has been rather busy lately, not with new vehicles or cars but rather they’ve been devoting their time, energy and resources in the bid of raising the public’s awareness on the subject of road safety and the host of new safety technology that’s available in Ford models.

Over the course of last weekend, Ford has been working tirelessly on its “Future of Safety with Ford” tour that took place at the 1 Utama Shopping Centre, where audiences experienced a 40-minute session that touched on various issues that blight drivers and passengers the same.

Ford demonstrated some of their new tech such as Adaptive Cruise Control and Collision Warning system which allow drivers to set the radar-based sensor (good up to 180 meters) and can adjust the speed of the car to maintain a set distance from the vehicle ahead of you.

The tour included a demo of the Third Age Suit which was designed by Ford so that younger engineers and designers wearing the suit can replicate the limited movement of the elderly and visually impaired, just to name a few. There’s even a Pregnancy Suit that replicates the motions and movements of expecting mothers. It’s research such as this that allows engineers to build safer cars.

An interesting feature in Ford cars is the SYNC 2 voice command system that allows the driver to turn up the A/C, for example by simply hitting a button and saying “Max AC” or make a hands free call by saying “Call Matthew Hernandez”.

Now what if you’ve a young driver in the family, and you want to ensure that they drive safe and responsibly ? Fret not for Ford has introduced the MyKey, which allows owners to limit top speed, stereo volume and restricts the deactivation of the traction control system, BLIS and stability control.

Ford Asia Pacific’s Director of Sustainability, Environment and Safety Engineering, Pete Hardigan said “Ford leads the way in the development of smart technologies and future transportation systems. We continue to go further to develop innovative safety and driver assistance technologies, while making them attainable and affordable for customers. In the coming years, we may see more services based on two-way V2V communication systems, allowing cars to communicate with each other about driving and traffic conditions, even when they are out of sight. In the longer term, we hope to see widespread use of V2I systems, allowing cars to talk to infrastructure and traffic management systems. The result could be safer roads, improved mobility, reduced emissions and fuel consumption.”