It takes guts, lots of guts to take a huge leap of faith in attempt to break away from what is essentially an icon to the automotive world. The icon we’re talking about is the MINI Cooper, and today saw the official introduction of the new MINI 5-Door after its initial reveal earlier this year.

As with its name, the MINI Cooper S 5-Door gets additional doors for the rear occupants and in this process of adding extra doors, the MINI 5-Door gains 161mm in overall length, thanks in part to the 72mm increase in wheelbase length.

This translates to more legroom and an increase of 15mm headroom space for the rear occupants. Boot space is also increased by 67 litres, totalling up to 278 litres. You’ll find out what we thought about the gains as you read on.

Everything up front is just like its 3-door sibling, and the new F55 MINI 5-Door is easily spotted with its halved-elliptical LED daytime running lights and honeycomb-styled radiator grille. Exclusive to this 5-Door MINI is the 17-inch two-toned Roulette Spoke rims shod with 205/45 R17 series run-flat tyres. Lighting sources are fully powered by LED – this includes the headlamps and the fog lamps.

The cabin of this MINI screams premium build quality, featuring the Carbon Black leather upholstered sports seats for both the front driver and passenger. The roof gets a convincing shade of Anthracite, among the other nifty touches such as the black-checkered surface and chrome-lined interior. Further increasing the cabin’s appeal is the MINI John Cooper Works’ multi-function leather steering wheel with Chilli Red contrast stitching, as well as the JCW logo embedded into the six o’clock position.

We tried getting in and out of the rather small rear doors, and ultimately rejoiced with the MINI’s new found practicality. Rear legroom is evidently bigger, and there’s more space for your arms to move about more freely than in the 3-door variant. The rear seats have a 60:40 split configuration that, if folded down, gives you a total of 941 litres of cargo space.

In the centre rests the 6.5-inch MINI Visual Boost LCD display which is operated via a five-key controller located next to the parking brake lever. This head unit comes with the MINI Excitement package as standard, giving you an orchestra of illumination seen on the instrument clusters, operating modules, door trims and centre console area.

Such numbers propel the car from 0 to 100 km/h in 6.8 seconds with a top speed of 230 km/h, all while returning just 5.5 litres of combined fuel consumption, thanks to the auto on/off engine function. The engine is paired to a six-speed sports automatic transmission that drives the front wheels.

MINI Malaysia has revealed that the RM20,000 Wired package (originally introduced for the 3-Door Cooper S variant) may be introduced for the MINI 5-Door in the near future, as will the 1.5-litre three-cylinder turbocharged Cooper. Till then, this 5-Door Cooper S can be yours for RM238,888 (OTR without insurance) and comes with a three-year or 50,000km warranty programme.

There are 11 shades of colour to choose from, inclusive of the newly added Electric Blue that is exclusive only to this variant. The roof, side mirrors and stripes can be had in either white or black. The car can be viewed at your nearest MINI dealership beginning this 15 November. 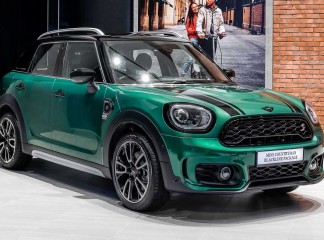 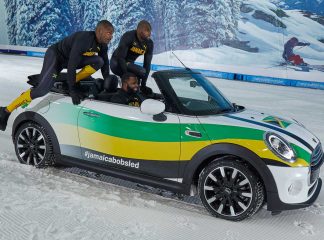