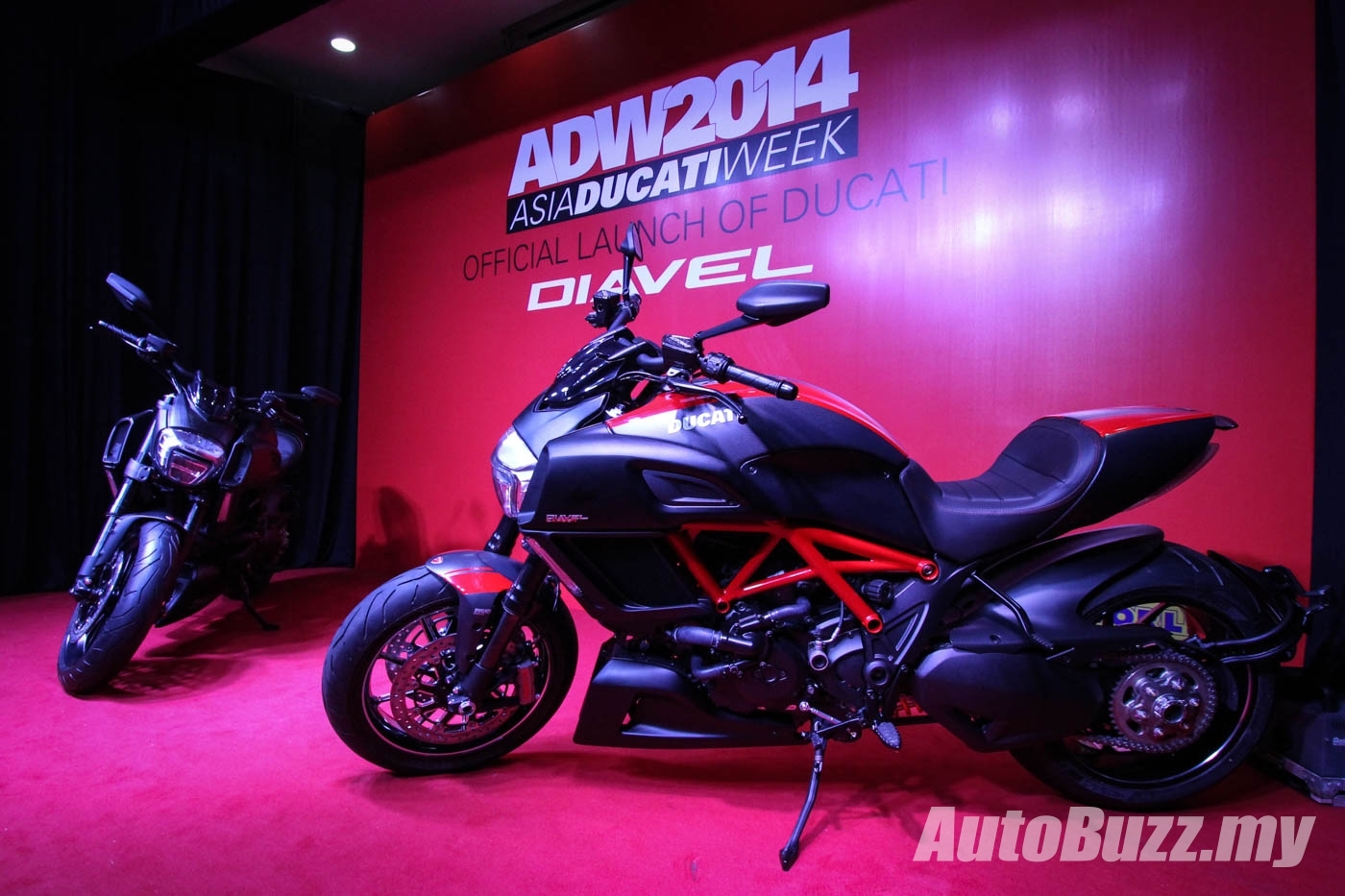 Sole importer and distributor of Ducati bikes in Malaysia, Next Bike Sdn Bhd together with Ducati Corse Moto GP riders revealed the 2014 Ducati Diavel at the KL Tower. Indeed it was the height of the Asia Ducati Week 2014 after launching the new Ducati Scrambler & the official announcement of the creation of Desmodonna Malaysia (A salute to the local Ladies of Ducati).

Ducati Corse MotoGP riders Andrea Dovizioso and Cal Crutchlow autographed posters much to the delight of guests and media that jam packed the Megaview Banquet Hall. The crowd anticipated to be one of the first to see the new devil of the re-incarnated defines of a modern sports cruiser.

All done in style and prestige high above the KL skyline, echoing Naza Group of Companies Joint Group Executive Chairman, Datuk Wira Hj SM Faisal’s determination to be right on the very top of the premium bike segment in Malaysia.

When Ducati created the Diavel to stir up the biking world, they never intended to label it a cruiser but the segmentation was popularly used by the motorcycling community and Ducati have since played along with it, and aptly so.

Not only is the Diavel quite a looker when you’re casually riding it around town but it’s also very easy to be tempted by it’s blistering performance when you’ve hit the open roads. Ducati has had tremendous success in Diavel and 2 generations on, this sports cruiser is more “sports” then “cruiser” and Ducati want’s you to know so.

Harnessing the insane power of the 162 horsepower, 1,198cc Testastretta 11º Dual Spark (DS) engine, The 2014 Diavel has a shift in torque figures to the lower and more usable RPM range, revving it easier on urban rides. Peak power arrives earlier at 9,250rpm instead of 9500rpm (on the previous model) and is overall more evident throughout the rev range.

The improvements are attributed to the revised engine intake & exhaust port as well as a more radically adjusted cam timing & compression ratio.

Drawing from its reservoir of power of is commanded by a full Ride-By-Wire system and safety regulated by Ducati Traction Control (DTC) with up to 8 levels of sensitivity. Configuration come in presets of 3 riding modes, Urban, Touring & Sports.

Aesthetics & practicality come in a package of all-round LED lights with LED headlamps to accompany the twin LED strip which functions as the brake lights, directional signals & tail lights in clean flowing lines. More on styling & practicality the Ducati way, are Split-level seats with horizontal ribbing (Retro!), grab rails that hideaway into the seats when unused and foot pegs that retract into the sub-frame when you’re riding “monoposto“.

The 2014 Diavel Carbon however can be yours also in a very diabolic Ducati Red over Matt Carbon with red frame or a tamer Star White over Matte Carbon with white frame. Both come with black contrast-cut forged wheels by Marchesini. Priced at RM126,888 (Nett Selling Price).