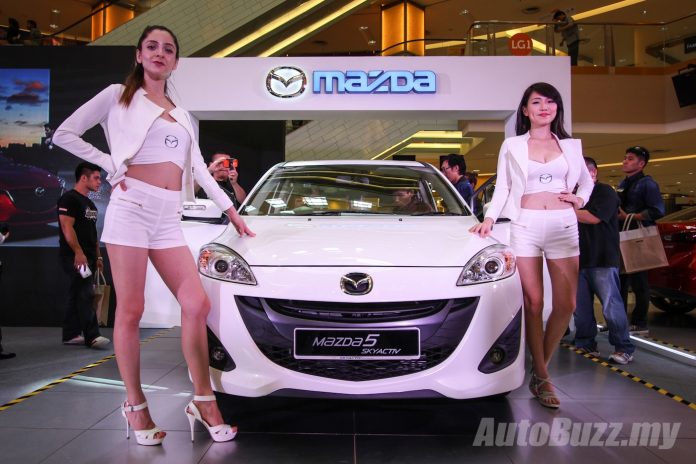 Bermaz Motor Sdn Bhd, together with the sole and exclusive importer of Mazda vehicles Prima Merdu Sdn Bhd introduced the new Mazda5 SkyActiv in Malaysia. The MPV which retains its current look now has adopted Mazda’s SkyActiv Technology and selling at RM153,019.

Mazda’s SkyActiv technology was first implemented in the Mazda CX-5, followed by Mazda6, the newly launched Mazda3 and the Biante MPV. Then it is Mazda5’s turn to adopt the SkyActiv Technology and join the new line-up.

The appearance with its “Nagare flow” design has not changed from the current Mazda5 except for the “SKyActiv Technology” badge on its tailgate. That makes us wonder when the Mazda5 with KODO design will be introduced.

The headlights on this MPV are halogen lights with Auto on-off, equipped with foglights, rear lights are bulbs, side mirrors come with turn indicators, 16-inch alloy wheels and it has a pair of powered sliding rear doors.

The Mazda5 has the unique ‘karakuri‘ seventh seat that allows you to carry six or seven occupants at a time. When required, the seat folds out of the left second-row seat to accommodate the seventh passenger. The ‘karakuri’ seat can be converted to ‘karakuri’ utility box when not in use.

There are three LCD screens in total with one in front, and additional headrest monitors for second row passengers. Audio system comes with CD, DVD, MP3 and USB features together with four speakers. Steering wheel and gear knob are leather wrapped, and the windscreen wipers are equipped with rain sensors. As for airbags, it comes with only two.

The new Mazda5 SkyActiv features the SkyActiv-G engine and the SkyActiv-Drive automatic transmission. Without the the rest of the technologies such as the SkyActiv-Chasis and SkyActiv-Body, it is not complete SkyActiv model as yet.

Its SkyActiv-G 2.0L engine has the highest compression ration in its class at 14.0: 1, providing better fuel efficiency and emission control. Together with the SkyActiv-Drive 6-speed automatic gearbox, it produces 149 horsepower and 190 Nm of torque. Acceleration figure from 0 to 100 km/h is at 11.4 seconds, with the top speed of 194 km/h. It uses 6.6 litres of fuel to cover a distance of 100km.

Comes with the SkyActiv technology is the i-stop feature that cuts the engine after eight seconds of idling to save fuel. The engine auto start again when its aircond compressor needs to operate to maintain cabin temperature.

In our video interview with Dato’ Amer Hamzah Ahmed, Executive Director of Prima Merdu Sdn Bhd, he said the Mazda5 SkyActiv is positioned to provide a comprehensive Mazda line-up for buyers, as the MPV’s contribution in sales figure is not as significant.