First introduced in 1967, the Ghibli was a two door, 2+2 grand tourer. In its heyday, the Ghibli outsold the Ferrari Daytona and the Lamborghini Miura. Production ended in 1973. The Ghibli then returned in 1992 and ended its successful run in 1997. It was replaced by the gorgeous 3200 GT the following year.

Flash forward 17 years later, an all-important new Ghibli returns in the guise of a 4-door sedan, a first in Maserati’s 100 years of history.

Competing in the E segment, the Maserati Ghibli will be available locally in two variants: the Ghibli and the Ghibli S. Both are powered by a new generation twinturbo 3.0 litre 60-degree V6 and comes with an 8-speed ZF automatic gearbox.

It shares the very same engine gearbox found in their flagship Quattroporte. Lighter and shorter than the Quattropporte, it also shares the same chassis and suspension, achieving a perfect 50:50 weight distribution as well as dynamic and precise handling.

Cosmetically, other than the different colours choices on the brake calipers, there is very little to discern between the two variants. This is in line with Maserati’s views on not separating the Ghibli into too many confusing variants.

With a whole catalog of customisable bits, future owners will be spoilt with choices to choose from. These includes an 8.4″ Maserati Touch Control, Plotrona Frau® leather finish, 15-speaker Bowers & Wilkins audio system, WLAN and many more.

The standard variant Ghibli produces 330 horsepower and 500 Nm of torque @ 4500rpm and accelerates from 0 to 100 km/h in 5.6 seconds. Hit the Sport mode overboost and all 500 Nm will be available at a low 1750rpm. It reaches a non-electronically restricted top speed of 263 km/h. Combined fuel consumption is 9.6 litres per 100km.

The Ghibli S delivers a whopping 410 horsepower and 550 Nm of torque @ 1750rpm in Sports overboost. It accelerates from 0 to 100 km/h in 5.0 seconds flat with a non-restricted top speed of 285 km/h and does a combined 10.4 litres/100 km for fuel efficiency.  Again, with a plethora of personalisation options.

The Ghibli is priced at RM 538,800, while the Ghibli S at RM628,800 (OTR without insurance). Both cars comes with a 3-year or 60,000km service package that is included in their respective prices. Although there is no concrete word of the Q4 and Diesel variants coming to our shores, Maserati is open to bringing them in if there is a strong demand. 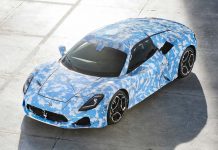 Check out David Beckham’s Maserati MC20 that he designed himself 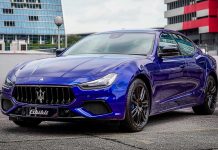