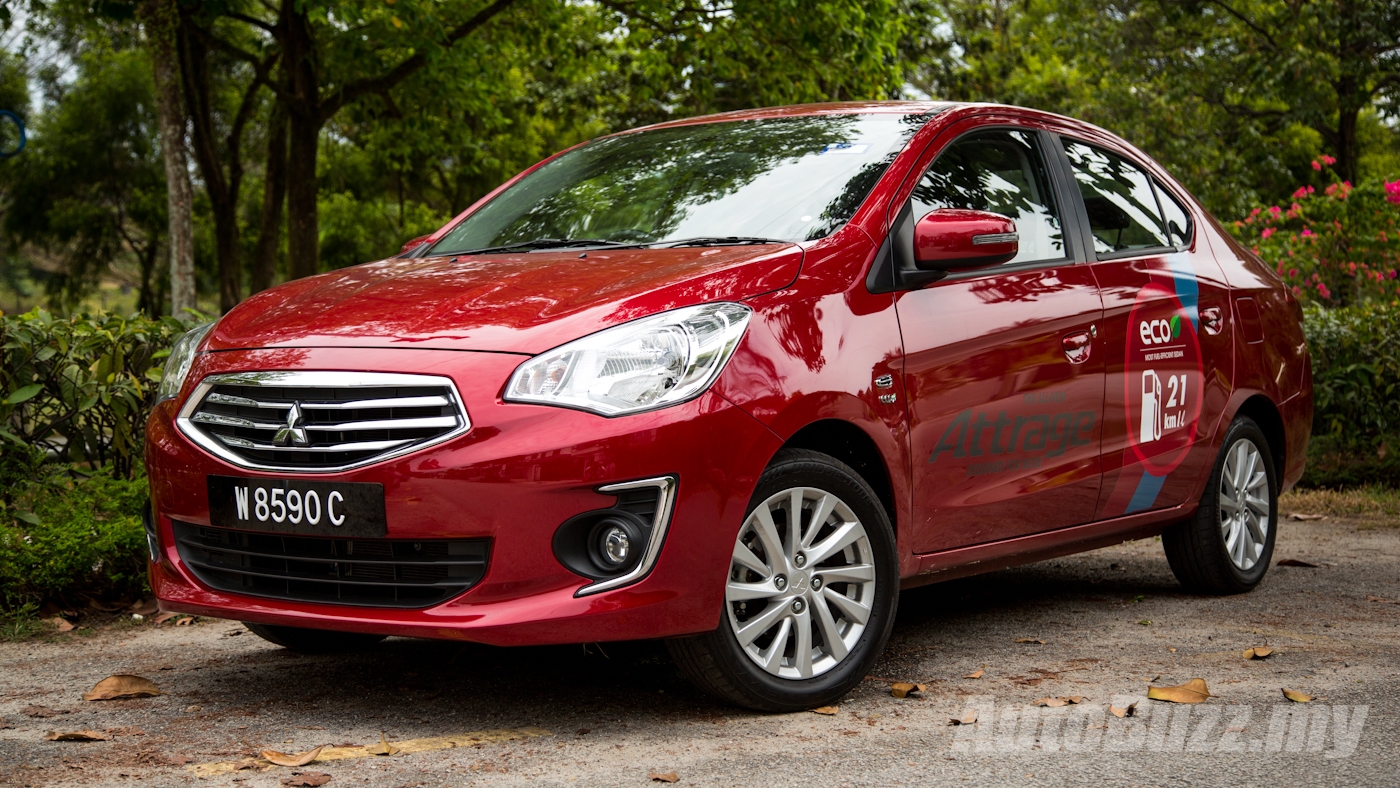 Mitsubishi cars, for all we know is all about performance and its prowess in car handling is second to none. But as a car company that struggles to keep itself afloat, the tri-diamond marque has taken bold steps to tone their vehicle lineup in lieu with the current trend of engine downsizing and focuses on developing fuel efficient cars. And thus, the Mitsubishi Attrage was born (from a reborn Mirage).

Watch our video review on the Mitsubishi Attrage GS

The Attrage is built in Thailand and sold under the Eco-Car programme. Like any “eco cars” sold under the band name, these cars are built as light as possible with engine capacity not exceeding than 1,300cc. Carbon dioxide (CO2) emission is set at a strict 120g/km and fuel consumption of at least 5 litres/100km.

With the Mitsubishi Attrage GS at hand, we put the newly launched sedan to a less than rigorous test, in and out of the city.

The Attrage comes in 3 different variants to choose from. The Attrage GL is the cheapest with RM 60,980 and comes with a manual transmission (5 speed). The Attrage SE is the most expensive with RM 77,980 and comes with daytime running lights, bodykit, security film, reverse camera and leather seats. Our test car, the Attrage GS sits in the middle with a RM 69,980 price tag. All prices mentioned are on the road price with insurance.

Watch our video review on the Mitsubishi Attrage GS

Many would come to a conclusion that stretching a hatch to form a sedan will never look good. Take a look at the Honda Brio Sedan for instance, it looks like an abomination with small trunk sticking out like a sore thumb. Then take a look at the Attrage, it may not look handsome but it is certainly presentable. The front fascia is good to look at and it is so aerodynamically streamlined that it gives a reduced drag coefficient of 0.29. As a comparison, Toyota Prius’s drag coefficient is rated at 0.25.

The Attrage is donned in 185/55 R15 Bridgestone Potenzas with alloy wheels. Hmm, doesn’t sound economical to me, perhaps a lighter 14-incher should do a better job in eliminating road noise.

With a 450 litres of storage, the boot could swallow 3-4 luggages. Suffice to say, that is not small and should suit everybody’s needs. The power folding mirror is an appropriate size, but too bad, the Attrage GS doesn’t come with LED turning indicators. It does however folds up automatically when you lock the car doors, saving you a few calories of hand movement.

At first glance, the interior does look good but not awe inspiring. The piano black centre console is where you would probably lay your eyes on most of the time. This is where the head unit & automatic air conditioner controls is housed. Simple configuration, but with a little glossy finishing, it feels classy to say the least.

The steering is nicely positioned but I must complain on the driver seating configuration. Yes, there is height adjustment, but I can’t seem to find my comfortable sitting position. I find the seat a little jerky (it moves front & back a little). Other than that, the Attrage offers really good real estate for those who travel with 5 people occasionally. Having a wheelbase of 2,550 mm, it certainly measures up with the likes of Toyota Vios!

There are a few neat feature incorporated into the Attrage. Take for instance, there is automatic light shutoff feature when the engine is turned off. Not to mention the interior lights will turn on for about 15 seconds after you enter the Attrage, thus allowing you to rummage for your keys or phone charger.


I am pleased to say that the 3-cylinder engine is surprisingly good for everyday drive. First of all, the pickup is good. It pulls pretty steadily and surely with 5 people onboard. A century sprint from 0-100 is super smooth, thanks to the INVEC-III CVT. Sadly though, I did not manage to bring the Attrage for an all-important uphill run. I am pretty confident that I will get the job done, but just barely.

Driving around town is hassle free. The engine feels very light and pulls eagerly like a well-oiled machine. The engine reminds me of a similar car that most Malaysians will remember fondly, the Kelisa. Of course the tiny MIVEC power plant is punchier and feels a little more civilised.

With such a light car, my first thought is that the Attrage does not come with power steering. But to my surprise, it does come with electronic power assist. Steering feel is very light at low speed, but it gets heavier at higher speed. It may sound good when it gets heavier at the right speed but it still very numb. A small flick of steering offers very little feedback and it doesn’t inspire confidence.

All is not lost though. Not to be discouraged, my friend and I took the Attrage to a large empty car park and try to fling the car around quite wildy. And my! The Attrage grips damn well, with a small amount of bodyroll. Yes, the unmistakeable Mitsubishi handling DNA is there alright.

Handling aside, I find the NVH of the Attrage mediocre. The engine growl the loudest at speeds of between 20-30km/h. Wind noise is also apparent at high speed. As suspected, this is a cheap and light car, so sound proofing is rather poor in this aspect. While you are seated, give a small knock on the roof of the Attrage and you will hear an unmistakable sound of metal clanking. It could be a nuisance to some (etc, when it rains), so do take note when you are scouring for a car.

As for MY fuel consumption, I can at best manage to squeeze 14-15km/l out of the Attrage. Don’t get me wrong, if you drive like a snail and doesn’t push the Attrage like I do, you will probably get close to the advertised consumption of 21km/l. I pushed the Attrage quite a lot just because I am sceptical that the puny engine is not powerful enough for my everyday drive, but it does deliver.


The Attrage is very compelling that it delivers a very simple message. Downsizing doesn’t mean it is bad. It goes as far to show that with the right formula, it certainly proves that it could stand against the might of any normal sedan put against it. Its superiority over the rest of the pack (B segment) is its claimed mileage of 21km/litre and that alone should attract city folks looking for an alternative other than a hybrid.


As a comparison, we tabulated and pitted the Mitsubishi Attrage against the Nissan Almera and Toyota Vios in terms of their similarly price variants, size, and fuel consumption.

Probably not. I am not very keen of having a car that tells me how and when to shift. I prefer to work with stick shifts. Not until the day when the fuel price becomes too unbearable, then I will consider getting one. For those who are not keen on buying a hybrid, this is a good option. The Attrage is big enough for small families and for balik kampung trips, without compromising on looks.

Watch our video review on the Mitsubishi Attrage GS.