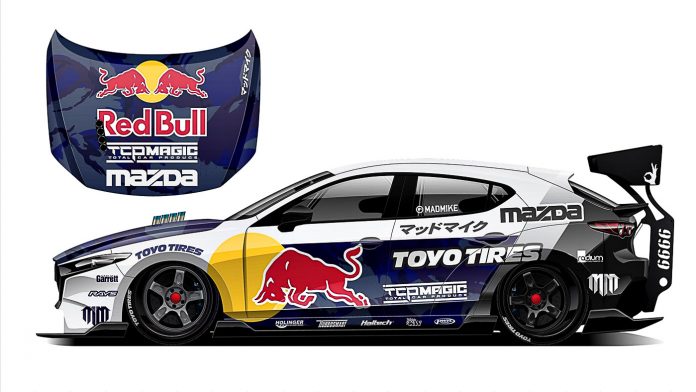 While the rotary engine has long ended its service life in Mazda road cars, the compact, high-revving combustion engine has been selected as an engine of choice for top-level professional drifting in Japan and the USA.

Mike Whiddett, better known as Mad Mike, has just released an illustration of his latest Mazda competition machine. The “mad” Mazda 3 hatchback will be not be burning Toyo tires and drifting, but instead, entering the annual Pikes Peak International Hill Climb.

Simple information on the ‘Wild Rotang’ Mazda 3 includes a heavily turbocharged four-rotor rotary engine churning out some 1,200 hp, honed by rotary specialist Taisuke Kawato from TCPMagic. Mad Mike, the 2018 Formula Drift Japan champion, and the gang also plan to include four seats on this four-door hatchback.

Grip is premium at hill climb events so a massive rear will be fitted on the Mazda 3, and revised suspension system on the converted rear-wheel drive machine means adding a Pandem bodykit to add more visual impact to the car.

RELATED: Mazda will be campaigning with a Mazda 2 SkyActiv-Diesel to study and develop sustainable, carbon-neutral fuels in Japan. More here.

The 100th running of the Pikes Peak International Hill Climb will take place on the weekend of 26 June 2022. Last year’s event was shortened due to poor weather at the 14,115-ft summit, with a heavily modified Bentley Continental GT3 Time Attack car the fastest machine using sustainable fuel.

As for the road car, the beautiful Mazda 3 hatchback is available in two variants in Malaysia, priced from RM137.7k for the 1.5L and RM154.7k for the 2.0L High Plus variant.