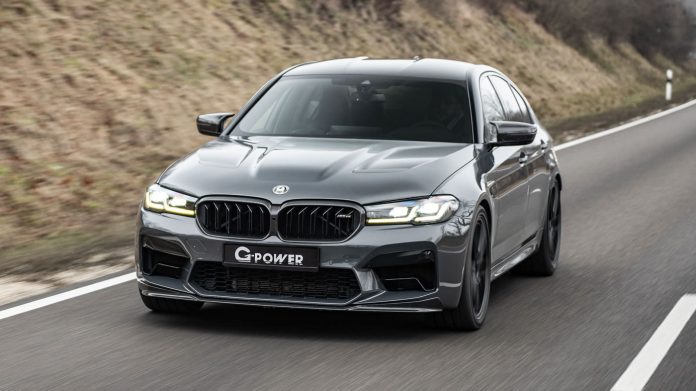 The all-new M5 CS, launched in January this year, is already the fastest and most powerful production car BMW has ever made – completing the century sprint in just three seconds flat. That’s a full-sized family sedan doing supercar speeds. But somehow, somewhere out there, there’ll still be someone who is not happy with that amount of power. That someone is German tuner G-Power.

G-Power has just unveiled its latest range tuning kit for the BMW M5 CS, with the most extreme stage (GP-900) raising the M5’s outputs to a whopping 900 hp and 1,050 Nm. Need I remind you once again that it’s for a full-sized family sedan.

Raising power outputs by 265 hp and 300 Nm over its stock configuration is no easy feat, and the German tuning company said that they had to installs parts like turbos, downpipes, and a software upgrade just to make it all work.

Alongside the engine upgrades, G-Power also fitted its GP-Deeptone stainless-steel exhaust system on the uprated BMW M5 CS, with the four tailpipe exits at the back covered in carbon fibre (or forged carbon). Aesthetic updates are kept pretty mild, however, with the only aftermarket change being the forged wheels, GP-Ventury vented carbon fibre bonnet, and the GP-Dynamic rear wing.

The company doesn’t mention the upgraded car’s century sprint time, probably to not alarm the officials. But what we do know is that the car’s top speed is increased to an electronically-limited 333 km/h, over the stock limit of 305 km/h.

Customers looking for a milder tune can also opt for the GP-700 with just a software tune, GP-740 with the GP Deeptone exhaust, GP-780 which adds on the sports downpipes, or the GP-820 (pictured) with even more hardware adjustments. And if you haven’t noticed yet, the numbers refer to their horsepower output.