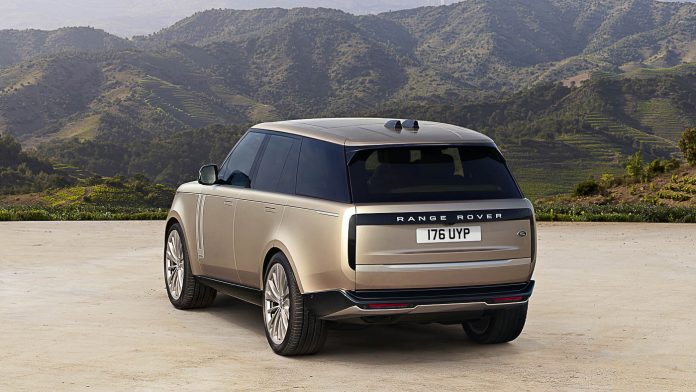 Land Rover has officially unveiled the all-new, fifth-generation Range Rover via a digital broadcast. The large premium SUV continues to be offered in two different wheelbase configurations with a seating capacity of between four to seven.

The trademark side and front profile of the Range Rover that began from the fourth generation have been maintained as the falling roofline paired with a strong waistline and rising sill line are trademarks that make it instantly recognisable as a Range Rover. The new slippery body now slices through the air with a low drag coefficient of just Cd 0.30.

The flush door handles and specially engineered hidden waist (where the windows and door meet) not only serve as design elements but also works to reduce drag.

While the front design has all the hallmarks of a Range Rover, the rear has been extensively studied and redesigned. The new boat tail rear, which tapers when viewed from the top, is a significant breakaway from all generations.

The tail lamps of the latest Range Rover feature a world-first ‘hidden-until-lit’ technology. The tail lamps appear as Vivid Red LEDs when in operation, only to form a distinctive Gloss Black graphic when not in use.

Meanwhile, the high-definition Digital LED Headlights with a range of up to 500 metres are the most advanced ever used in a Range Rover. Fitted with up to 1.2 million micromirrors, the high-tech headlights can focus on 16 objects simultaneously and blank out reflections!

The new Range Rover will continue to be offered in a standard wheelbase as well as a long-wheelbase variant that is 200 mm longer, bringing the total length to 5,252 mm. Variants continue to be the SE, HSE and Autobiography, with the First Edition (upgrade of the Autobiography) being available only for the first year of production.

The new Range Rover SV meanwhile will offer an exquisite interpretation of luxury and personalisation from the experts at Special Vehicle Operations, with “SV Serenity” and “SV Intrepid” design themes plus the four-seater “SV Signature Suite” configuration.

A wide choice of powertrains are available from launch, with the fully electric Range Rover set to join the line-up in 2024. The new Extended-Range PHEV powertrains are the P440e and the P510e, to be only available from early 2022, offers a long electric driving range of up to 100 km, thanks to a massive 31.8 kWh lithium-ion battery pack.

The model numerals represent the total PHEV system outputs of 440 hp and 510 hp respectively, with the latter completing 0 to 100 km/h sprint in just 5.6 seconds.

Two diesel engines are also offered, the D300 and the D350, which serves as the entry point into the new fifth-generation Range Rover. Meanwhile, at launch, the flagship P530 variant with a new twin-turbo V8 engine has 530 hp and does the century sprint in just 4.6 seconds. A P400 mild-hybrid six-cylinder Ingenium engine will serve as the entry for petrol powertrains.

Fuel efficiency and in-cabin serenity are also significantly improved thanks to the usage of a new Mixed-Metal Modular Architecture (MLA-Flex) that promises up to 24% improvement in quietness. The new structure is also up to 50% stiffer than the outgoing model.

As such, the interior of the new Range Rover builds upon the improved calmness and serenity levels. On offer is the world-first noise-canceling headrest speakers (in the four main headrests) designed to create individual quiet zones, as part of the 1,600W Meridian Signature Sound System. 27 other high-performance speakers further cancel noise levels or playback the finest musical notes.

The new Range Rover also brings new levels of wellbeing via the Cabin Air Purification Pro, combining dual Nanoe X technology for allergen reduction and pathogen removal to significantly reduce odours, viruses and even the SARS-CoV2 virus. As the cabin is so large, two Nanoe X devices are used; the second being in the rear seat air conditioning vent.

Up in front, the dashboard features the latest Pivi Pro digital infotainment technology, consisting of a new semi-floating 13.7-inch interactive driver display and a 13.1-inch curved floating touchscreen with haptic feedback. Range Rover has also integrated Amazon Alexa as the user interface to operate all the functions via natural voice commands.

Pivi Pro also controls the opening and closing of the power-assisted four doors for an elegant entry and exit in any situation.

The Range Rover portrays luxury and immensely capable off-road driving, and as such, key highlights of the fifth-generation Range Rover include a new Dynamic Response Pro electronic roll control system, all-wheel steering and fully independent air suspension with Adaptive Dynamics and wading into depths of up to 900 mm.

Terrain Response 2 will be the central controller to everything relating to the chassis and power delivery, with a choice of six driving modes plus a user-configurable mode to create a bespoke chassis set-up.