Here it is folks, one final teaser image of the all-new Subaru WRX before its official launching in the USA that is scheduled today at 9:00 pm Kuala Lumpur time.

The lone image was actually a thumbnail for an earlier recorded walkaround video by Motortrend.com. The video is clearly still unavailable to play at this moment, but it could well be a teaser to their website as well as for Subaru USA.

With the thick black trim surrounding the wheel arches as well as the lower portion of the car, the new 2022 Subaru WRX looks like a lowered crossover-sedan mash-up. This styling was clearly a designer’s favourite aspect, as it first appeared in the Subaru Viziv Performance Concept.

Full details of the performance sedan will be released tonight, but key enthusiasts features such as a turbocharged boxer engine (allegedly displacing 2.4-litres), manual transmission and quad exhaust tips are all available in the all-new 2022 Subaru WRX.

Toyota and Subaru are rumoured to jointly build an AWD hot-hatch. Find out more here! 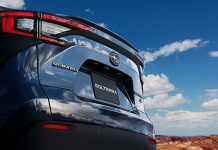