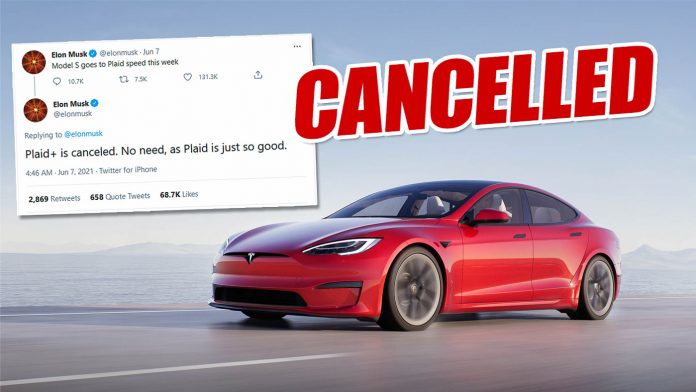 Tesla unveiled the heavily-anticipated “Plaid” versions of the Model S earlier this year, featuring three electric motors, insane performance, and impressive range. Two variants were announced at launch, including a balls-to-the-walls Plaid+ variant that was supposedly scheduled to begin deliveries later this year.

However, within a short six months since the announcement, Tesla has now cancelled the range-topping Plaid+ variant. Why? Well, according to Tesla’s eccentric CEO Elon Musk, it’s because the regular Plaid is “just so good”.

In line with Tesla’s modus operandi these days, the announcement was, of course, made on Musk’s own Twitter account. Tesla no longer has a PR department, thus details about the cancellation are scarce – and there’s no way of getting more information unless Musk decides to tweet about it.

Industry experts including Bloomberg however, are speculating that the cause of the cancellation is due to the new high-performance 4680 battery cells still not quite ready for primetime.

The Plaid+ Tesla Model S supposedly offers over 830 km of fully electric range in one single charge, a 200 km advantage over the regular Plaid variant. That is on top of the supposedly “over 1,100 hp” output, translating to a Bugatti Chiron-beating century sprint time of “under 1.99 seconds”.

Just too bad then that we won’t get to actually see it in action. Though if you choose to believe Musk’s words, the regular Plaid will be just as good – and the numbers certainly seem to suggest so. The new model will begin deliveries this week, with a delivery event livestream scheduled for the 10th of June.