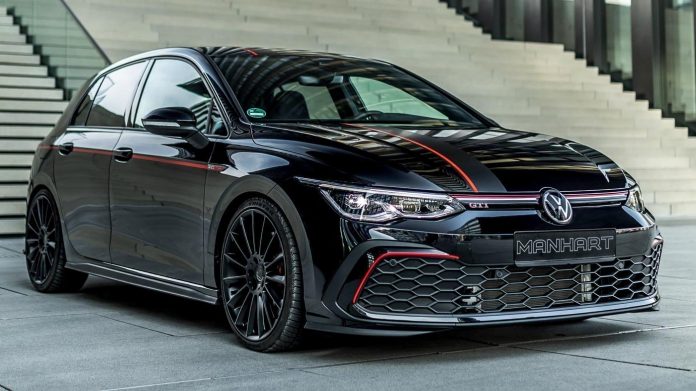 To us, hot hatches are the kind of cars that don’t really need a tonne of power. A sweet handling, six-speed manual transmission, and around 240 hp or so is more than enough for a jolly good time. But evidently not everyone has the same opinion as us, as Manhart has just proved with their VW Golf GTI 290.

As the name suggests, the souped-up hot hatch now comes with 290 hp and 425 Nm of torque, up from 245 hp and 370 Nm in standard form. The extra grunt comes from the MHtronik module, which was developed completely in-house by the German tuning firm.

Manhart did not disclose any performance figures for the GTI 290, though it’s pretty safe to assume that the extra power has knocked a couple of tenths off the already-quick 5.9 seconds century sprint time of the standard Golf GTI (with a seven-speed DSG transmission).

To complement the extra performance, Manhart has also given the VW Golf GTI a couple of visual tweaks – most noticeably are the new Manhart ‘Venturi’ wheels in “silk matte black”, measuring 19-inches in diameter. The entire car is also lowered by 40 mm, courtesy of the new H&R springs.

Rounding off the exterior aesthetic changes are the new in-house diffuser on the rear bumpers, complete with red decorative outlines to match the new decals all around the black-bodied Golf GTI.

On a usual tuning job, the upgrades pretty much end there. But not for this Golf GTI 290, because Manhart also included what might just be the coolest standard equipment ever, a new LED-lined starry sky headliner to style up the interior. Doesn’t that just remind you of Rolls-Royce?

No pricing information has been provided for this little gold nugget, but that’s partly because you can also request for additional tuning options, such as exhaust and brakes. Interested? Check out the product page here.