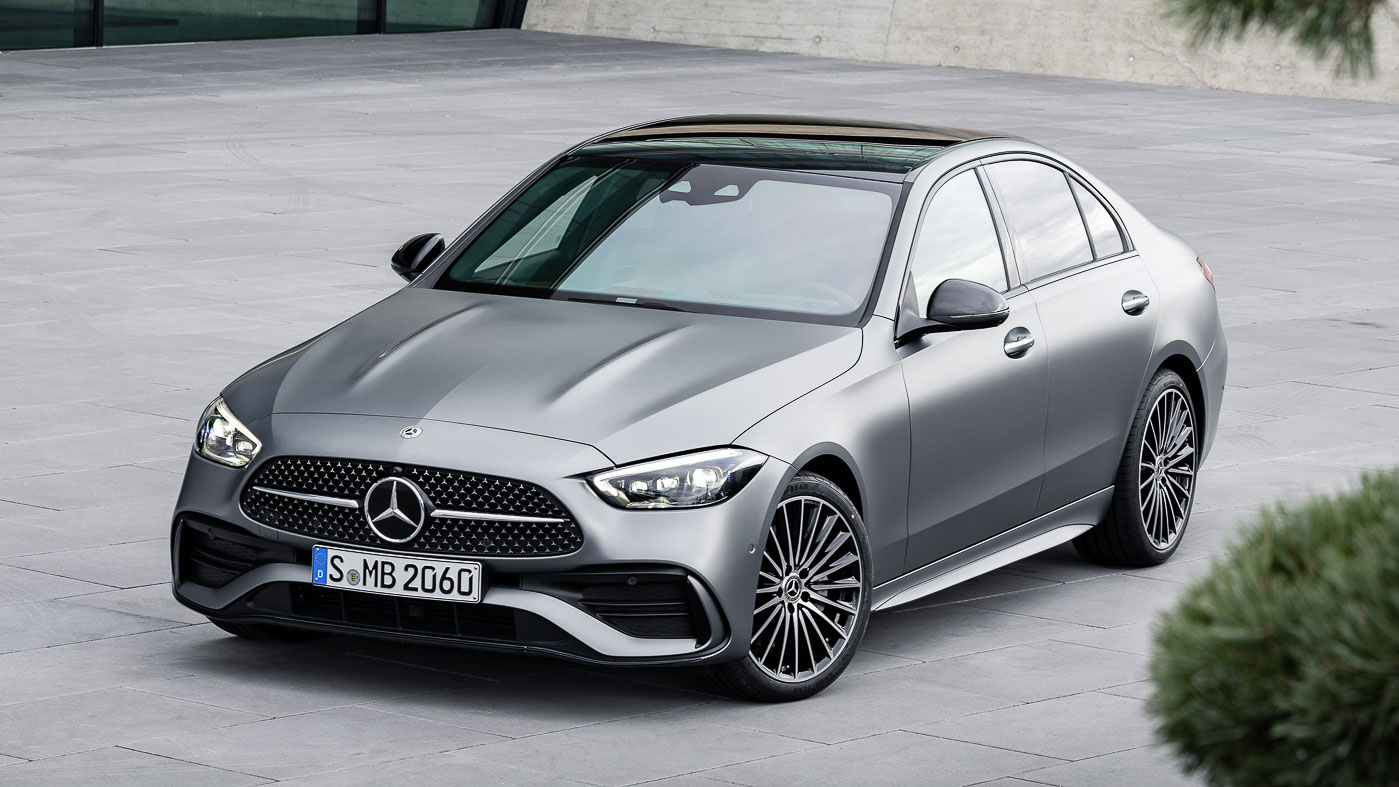 Following months of teasing and leaks, Mercedes-Benz has now officially unveiled the all-new C-Class, making its world debut in both sedan and estate forms.

Following in the “junior S-Class” footsteps as seen on its predecessor, the all-new C-Class was also heavily inspired by the W223 S-Class, looking like a scaled-down version of the luxury sedan both outside and inside.

In terms of dimensions, the new W206-generation C-Class has increased substantially in length – 65 mm longer to be exact, along with a 25 mm longer wheelbase at 2,865 mm. Width however is just 10 mm wider, coupled with the 9 mm lower ride height to give the all-new C-Class a sportier profile.

While the silhouette of the all-new Mercedes-Benz C-Class does look quite similar to the outgoing model, the designers actually worked to reduce its lines to a minimum, while emphasising the shoulder line even more in the new C-Class.

For the new C-Class, all variants will feature a large central star on the grille – no option for a standing bonnet ornament emblem in this generation. Depending on the variant, the design and character of the radiator grille will differ in its details. In this AMG Line for example, each of the mini stars (a total of 240 individual stars!) on the grille are finished in the chrome ‘pins’ design.

The highly advanced Digital Light headlamp system, which debuted with the all-new S-Class, can be had as an option in this all-new C-Class. This revolutionary lighting system, which relies on three extremely powerful LEDs refracted by millions of micro-mirrors, is able to achieve a lighting resolution of over 2.6 million pixels, offering excellent visibility with minimum dazzle to other drivers.

Additionally, the lights are also capable of projecting warning signs directly onto the road ahead, warning the driver of any impending dangers while keeping their eyes on the road.

Like its predecessor, the tail lamps design on the all-new C-Class is also heavily influenced by the design of the all-new S-Class, now employing a slim two-piece design in the horizontal orientation.

The second-generation Mercedes-Benz User Experience (MBUX) from the S-Class is also found here and the portrait-oriented screen is the main highlight. Two configurations of screen sizes are available, with the basic driver’s display measuring 10.25 inches and the central display in 9.5 inches.

A fingerprint scanner is located below the central display. This allows drivers to log into MBUX quickly, conveniently, and securely. Different settings of favourites, navigation points-of-interest, calendar entries and even emails are protected.

The fingerprint scanner also allows secured payment via Mercedes me.

Mercedes-Benz also wants its drivers to be fit and healthy, and as such, a feature called Energizing Coach is built into the MBUX system. It suggests appropriate fitness and wellness programme based on vehicle and trip data plus the driver’s sleep quality and stress level from data obtained in their wearable smart device.

Behind the new grille with 240 tiny stars and one big central star is a variety of diesel and petrol-power four-cylinder engines with 48-volt mild hybrid system.

All engines have an additional boost of 20 hp and 200 Nm from the new second-generation integrated starter-generator (ISG) installation.

For the new-generation plug-in hybrid variant, Mercedes-Benz estimates an electric range of around 100 kilometres is possible from the 25.4 kWh (four-times larger) battery. Thanks to a 55 kW DC fast charger, it can be fully charged in 30 minutes. The MBUX can also offer a ‘power nap’ programme for the interior to refresh the occupants whilst charging.

No mention of the combined system output when paired to the two-litre engine, but the electric motor has outputs of 129 hp and 440 Nm of torque, an increase of 49 hp and 100 Nm versus the old C350e.

Another key piece of technology from the new S-Class that has trickled down to the new W206-generation C-Class is the rear-axle steering. It allows the rear wheels to turn in either direction by as much as 2.5 degrees.

At parking speeds, it turns in the opposite direction of the front wheels for easier entry and reduced effort into the parking spot. At speeds above 60 km/h, the rear wheels steer up to 2.5 degrees in the same direction as the front wheels, improving handling stability.

Ride comfort and agility have been further improved courtesy of a new four-link axle at the front and a subframe-mounted multi-link axle at the rear. Air suspension will be fitted to the rear axle of the plug-in hybrid models due to the placement of the battery pack in the boot.

Advancements have also been made in the aspect of the Advanced Driver Assistance System (ADAS). The Active Distance Assist Distronic can detect stationary vehicles on the road at speeds up to 100 km/h, where the previous version could only be available up to 60 km/h.

The new Active Steering Assist helps the driver to stay in lane at speeds up to 210 km/h. The technology now uses the 360-degree surround view camera to better place the vehicle within its lane.

The new Mercedes-Benz C-Class will commence deliveries in Europe from summer this year.