Home News The all-new Porsche 911 GT3 gets even faster while keeping all the... 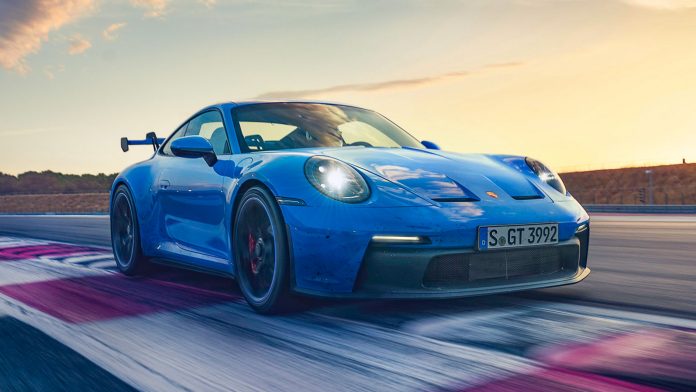 As far as enthusiasts go, there probably aren’t that many things more important to us than the launch of an all-new Porsche 911 GT3. Now a little over two years into the life cycle of the 992-generation 911, Porsche has finally unveiled the highly-awaited GT3 variant of the coupe, and was it worth the wait.

Just like the base 911 model, the 2021 Porsche 911 GT3 follows, in large, the same recipe as all of its predecessors. Sure, it’s a little larger, and looks a little different from before, but underneath all that is still the familiar GT3 that we all know and love.

Behind the driver’s seat is still the same beloved 4.0-litre naturally-aspirated flat-six engine that revs all the way up to 9,000 rpm. Claimed to be “acoustically impressive” (thanks to an “infinitely electrical adjustable exhaust flaps”), the new power plant now makes 510 hp and 470 Nm, roughly 10 hp and 10 Nm higher than the outgoing model in its final years.

OK, so it isn’t necessarily faster in a straight line than its predecessor, but that’s about where the similarities end (in terms of performance). Just like all previous models, Porsche took the all-new 992-generation 911 GT3 out to the Nurburgring Nordschleife for its final development process, and the results even shocked Porsche themselves a little.

In the capable hands of Porsche development driver Lars Kern, the all-new 911 GT3 completed the full 20.8 km lap in just 6:59.927 minutes. Without the final straight, the shorter 20.6 km track – traditionally served as Porsche’s benchmark – was completed in 6:55.2 minutes – over 17 seconds quicker than its predecessor.

For context, Porsche’s flagship (but admittedly aging) hypercar, the 918 Spyder, only did it in 6:57 flat. The all-new Porsche 911 GT3 even beat out the outgoing all-out-performance GT3 RS variant, which did a 6:56.4 around the shorter track. Improvements in the tenths, or even seconds, are expected in a generational improvement, but 17 seconds? Almost unheard of.

A huge reason, we think, for the incredible improvement is due to the suspension set-up of the all-new GT3, which now uses a double wishbone system up front instead of regular struts.

The huge swan neck rear wing which, along with the diffusers, are both manually adjustable, also contributed to the new-found performance – in its most aggressive setting, the car’s aero kit can generate up to 150% more downforce compared to the outgoing GT3.

Despite its wider body, the weight of the new 911 GT3 is also pretty much on par with its predecessor, thanks to the generous use of carbon fibre parts, lightweight glass windows, optimised brake discs (which are thinner by around 17%, despite being larger in size), and forged light-alloy wheels. The new sports exhaust system by itself already dropped 10 kg from the car’s total weight.

Being that much faster, while keeping all the right bits unchanged? Sign us up. The all-new Porsche 911 GT3 is now available for pre-order at all Porsche Centres nationwide, though pricing will only be announced at the official launch later this year.

If you’re so inclined, you can also include a special Porsche Design chronograph watch in your order, designed specifically to match the all-new GT3 – and can even be painted in the same colour as your car.