Electric vehicles are coming, and there’s nothing you can do about it no matter how much you resent it. In another example of the ongoing shift in the automotive industry, newly-minted Stellantis (FCA-PSA) will be transitioning its manufacturing plant in Tremery, France, from producing diesel engines to fully-electric powertrain.

The transition will not happen in an instant, but the ramp-up does look pretty sharp. From less than 10% of its total output in 2020, the factory is looking to double its electric powerplant production capacity to around 180,000 in 2021, and eventually reaching 900,000 – or more than 50% of the plant’s peak pre-pandemic output – by 2025.

Speaking to Reuters, Laetitia Uzan, a representative for the CFTC worker union at Tremery added: “2021 is going to be a pivotal year, the first real transition towards the world of electric models.”

While diesel isn’t the popular choice for combustion material in civilian vehicles here in Malaysia, it still accounts for more than 40% of the vehicles sold in Europe. However, demand for diesel-powered vehicles is already on the decline, with the fall further accelerated by the Dieselgate scandal.

Carmakers left and right are also dropping diesel in response to the tightening emission regulations around the world, but when the largest diesel engine factory in the world is transitioning away from diesel fuel, it’s pretty much the final nail in the coffin for Rudolph Diesel’s namesake invention.

Aside from the loss of yet another internal combustion technology, the transition also comes with another downside – job cuts. Given the relative simplicity of an electric motor as compared to a traditional diesel engine (with approximately one fifth of parts), the change in focus will more than likely put some of the 3,000 Tremery plant workers’ jobs at risk.

Stellantis has said that they will not be closing any factories, and will seek to protect jobs, but that’s still not a guarantee. Uzan acknowledged the risk that fewer staff may be needed, but was optimistic that the cuts could happen “quite naturally” as workers retire without being replaced.

However, the Tremery factory is only one part of the entire picture. Industry researchers warn that Europe’s car manufacturers, who are already suffering from overcapacity, will have to make big cuts in order to deliver the investments needed to catch up with leading EV manufacturers, such as Tesla.

French car lobby group PFA estimates that 15,000 jobs linked to diesel are at risk in France, out of 400,000 employed by the industry as a whole. Meanwhile, German labour research institute IAB says that the transition to electric vehicles could threaten 100,000 jobs in Germany alone, approximately one in eight German automotive industry jobs. 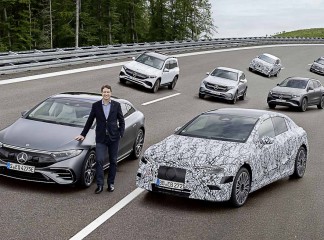