Home News The new 488 GT Modificata is Ferrari’s track-only parting gift to the... Ferrari has a history of releasing an all-out track special while they run out an ageing model. The Ferrari FXX-K was for the LaFerrari, and the 599XX was for, well, the Ferrari 599. Now that the Ferrari 488 is being replaced by the F8 Tributo, Ferrari has kept up with its tradition by unveiling the swansong track special version for the model, the 488 GT Modificata.

‘Modificata’ stands for modified in Italian, or in Ferrari speak, means “designs that have been evolved for better performance”. In this case, the Ferrari 488 GT Modificata essentially takes on the best bits from the 488 GT3 and 488 GTE race cars, plus additional development work on the engine since it is unrestrained by FIA’s rulebooks.

As a result, the 3.9-litre twin-turbo V8 now makes 700 hp, thanks to a revamped transmission with a carbon-fibre clutch and different transmission ratios, as well as more aggressive engine mapping. The car’s suspension comes straight from the 488 GTE, while its new Brembo brake system with low residual torque callipers and advanced ABS system is taken from the 488 GT3 Evo.

The exterior is also heavily inspired by these race cars, and is equipped with race car-esque front splitters, large rear diffusers, as well as a humongous wing, because race car. The aerodynamics of the 488 GT Modificata was also extensively fine-tuned on the Nurburgring Nordschleife.

Ferrari says the resulting car has a higher downforce at the front without increasing overall drag, making for better efficiency and sensitivity to changes in rear wing angle. Total downforce is rated at over 1,000 kg at 230 km/h.

Just like any other race car these days, the entire body is also made out of carbon fibre, barring the roof and uprights – which are made out of aluminium.

Buyers can customise both the exterior and interior to any specifications they like. Standard equipment on the track-only Ferrari 488 GT Modificata include aV-Box acquisition system, which is combined with Bosch’s telemetry data acquisition system, a high-resolution rear-view camera, as well as a TPMS system.

Although it is an unrestricted trackday car, the 488 GT Modificata still comes as standard with a second seat, which means you still can bring a passenger along with you for a joyride.

Due to its limited quantities, the Ferrari 488 GT Modificata will initially only be offered to drivers who have recently participated in Ferrari’s own Competizioni GT or Club Competizioni GT race series. So if you’re not already in Ferrari’s contact book, tough luck. For the rest of us, just be happy there’s now a Lego Technic model for the 488 GTE…

Owners will also get the chance to participate in five events on tracks that “bring out both the handling and dynamic qualities of the cars”, with events planned at the Virginia International Raceway, Monza, Watkins Glen, Suzuka and Nürburgring, as well as the Finali Mondiali – all of which to happen from 2021 onwards. 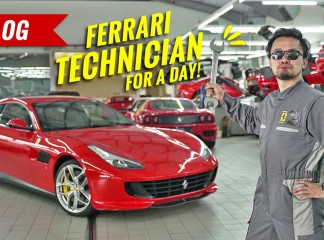