Home Features Tesla somehow thinks that shooting laser beams into the windscreen is a... 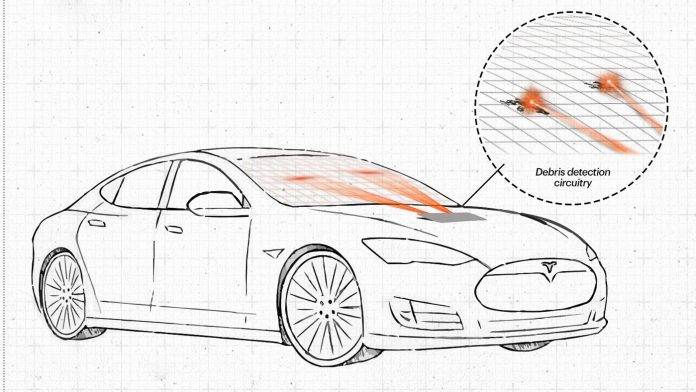 Carmakers are always pushing the boundaries of ideas to think of the “Next Big Thing” in cars, be it autonomous driving tech or things like rear-seat frontal airbags. But in the imagination process of coming up with these big ideas, there are bound to be a few more left-field ones.

Thanks to Rivervale Leasing who pored over some of the recent patent filings made by Tesla, we now get a chance to see some of these new ideas which may shape our future vehicles, or as you may discover, some pretty oddball ones.

Just to be clear, patent filings do not always end up on production cars – it’s just a mechanism to protect their ideas. Nevertheless, here’s a list of four patents recently filed by Tesla. Which of these do you think will be the first to be seen on an actual car?

Touchpads on steering wheels isn’t something new – we’ve seen them on Mercedes-Benz vehicles for nearly five years now. But according to the patent filing, Tesla’s patent seem to suggest a fully interactive module, with visual feedbacks (i.e. screen) to react to the driver’s gesture inputs.

In addition to adjusting your infotainment system as one would expect, Tesla’s patent also suggests the ability to control almost everything else on the car, from the climate control system to the famous (or infamous?) Autopilot feature.

2. Seats that can detect your age

Many premium cars now already come with seat sensors to prevent the deployment of passenger airbags when the seat is not occupied, but Tesla’s patent here takes these seat sensors to a whole other level, adding height and weight detection to determine the age of the passenger.

Tesla’s reasoning is that incorrect use of airbags can cause more harm than good. For example, a standard airbag may cause serious injury when deployed on children. By using a combination of weight and height sensors, the car will be able to accurately estimate the age of the occupant on the front seats.

The difference age classifications will then affect the airbag’s release, which Tesla says can be either fully, partially, or not detonated at all. Additionally, the sensors will also be able to take into account a variety of conditions – such as posture, leg position, and clothing – in predicting the passenger’s age.

3. Seatbelts that can detect improper usage

We’re sure you’ve come across someone who’s buckled up their seatbelts, but only proceed to sit on top of it – or even worse, using one of those fake buckles just to get rid of the beeping seat belt reminder? Well, with Tesla’s patent, these dangerous acts of defiance may soon become a thing of the past.

The patent, detailed as “improper seat belt usage detection”, envisions a suite of sensors placed within the seatbelt itself to detect incorrect seatbelt usage – as the name suggests so eloquently. For example, it will be able to detect if the seatbelt is worn underneath the passenger’s arms, which can cause serious injuries in a collision.

Unlike many of these patents, we can definitely see this system being used on future vehicles – given how important proper seatbelt usage is for general vehicle safety, and how simple it seems – on the surface at least, we’re no engineers – to implement such a system.

4. Using laser beams to clear debris on the windscreen

The last one on the list is definitely the most… unusual entry to put it lightly. Tesla suggests in this patent filing for the use of actual laser beams, shot directly at the windscreen (you know, where the driver’s eyes look outwards to see the roads) to clear off accumulated debris.

Now as we’ve said before, we are no engineers. We’re sure that Tesla has thought this through and devised some way to prevent permanent eye damage on the passengers, but we just can’t shake off the image in our heads where the lasers inadvertently caused the drivers to be blinded while driving, resulting in a horrifying crash… We’re sure Tesla has thought this through, right?

Anyway, the patent describes a “debris detection circuitry” to accurately detect the dirty spots on your windscreen, and then using a controlled pulsating laser beam calibrated at a specific rate to remove debris without damaging the glass surface. Laser cleaning isn’t a new technology, but we’re just not so sure that using them on windscreens is the best idea.