Home News Hold your pitchforks – the FWD BMW 128ti actually looks like a... 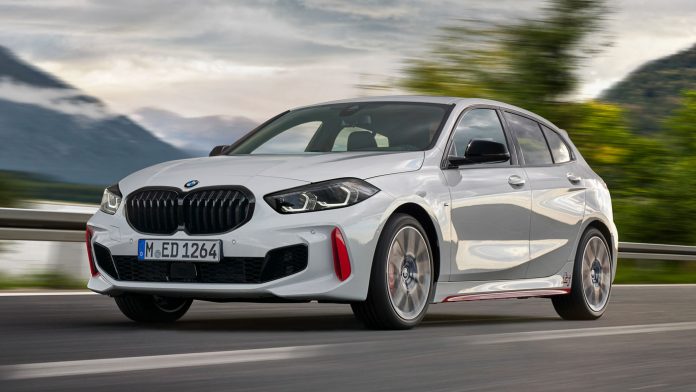 Following a brief preview last month, BMW has now officially unveiled the 128ti in full, their first-ever front-wheel driven hot hatch set to rival the likes of the Volkswagen Golf GTI and Renault Megane R.S. The new 128ti is only the third BMW model ever to feature the ti suffix, which stands for Turismo Internazionale.

The all-new BMW 128ti will slot in nicely between the 120i and the range-topping M135i xDrive. According to BMW, the 128ti is more than an additional engine variant, rather it’s an “unfiltered driving machine with a distinctive character”.

To back up those claims, the 128ti comes with a set of specially-tuned M Sport suspension with a 10-millimetre decrease in ride height for a lower centre of gravity, which translates to better handling. It also comes with the same Torsen limited-slip differential employed on the BMW M135i xDrive, combined with a model-specific steering setup specifically designed to further reduce torque steer.

Also from the M135i xDrive are the firmer anti-roll bars and anti-roll bar mounts with high preload, as well as stiffer springs and shock absorbers.

Powering this front-wheel driven hot hatch is a 2.0-litre turbocharged four-cylinder engine which produces 265 hp and 400 Nm of torque. Paired with an 8-speed Steptronic Sport transmission, the BMW 128ti launches from naught to 100 km/h in 6.1 seconds, onward to a electronically-limited top speed of 250 km/h.

Meanwhile, stopping power is provided by the 360 mm and 300 mm discs front and rear, paired to a four-piston brake fixed calliper and single-piston floating caliper respectively – painted red (apparently a first on the 1 Series) to match the exterior flourishes of the new ti.

The exterior of 128ti is based on the M Sport specification, which means it looks essentially identical to the M135i, down to the front apron with sculpted air intakes and the rear bumpers in high-gloss black.

To differentiate between the models, the outer air intakes and vents for the air curtain have been painted a bright red colour, alongside the side skirts which also comes with a ‘ti’ badging. The 18-inch Y-spoke style 553 M bi-colour light-alloy wheels are also exclusive to the model, in addition to the 128ti badging on the tailgate and dual 90 mm tailpipe exits.

The red accents are only available on cars painted in Storm Bay, Mineral Grey, Sapphire Black, or Alpine White though; the BMW 128ti in Melbourne Red or Misano Blue will get black accents, which should work quite well with the Extended Shadowline exterior package which blacks out the kidney grille and wing mirrors, alongside the dark-tinted headlights.

The red accents continue onto the interior of the 128ti, including a large strip on the backrests of the standard sport seats, the embroidered “ti” badge in the central armrest, and contrast stitching along the armrests, door panels, M Sport steering wheel, and the dashboard.

Other highlights on the interior of the new ti include the M footrest and stainless steel M pedals, M door sill strips, and M seatbelts. As standard, the 128ti is fitted with the BMW Live Cockpit Professional system with two 10.25-inch displays.

The BMW 128ti is set to launch in Germany somewhere in November 2020. Closer to home, BMW Malaysia recently launched the M135i xDrive which you can read more about over here.