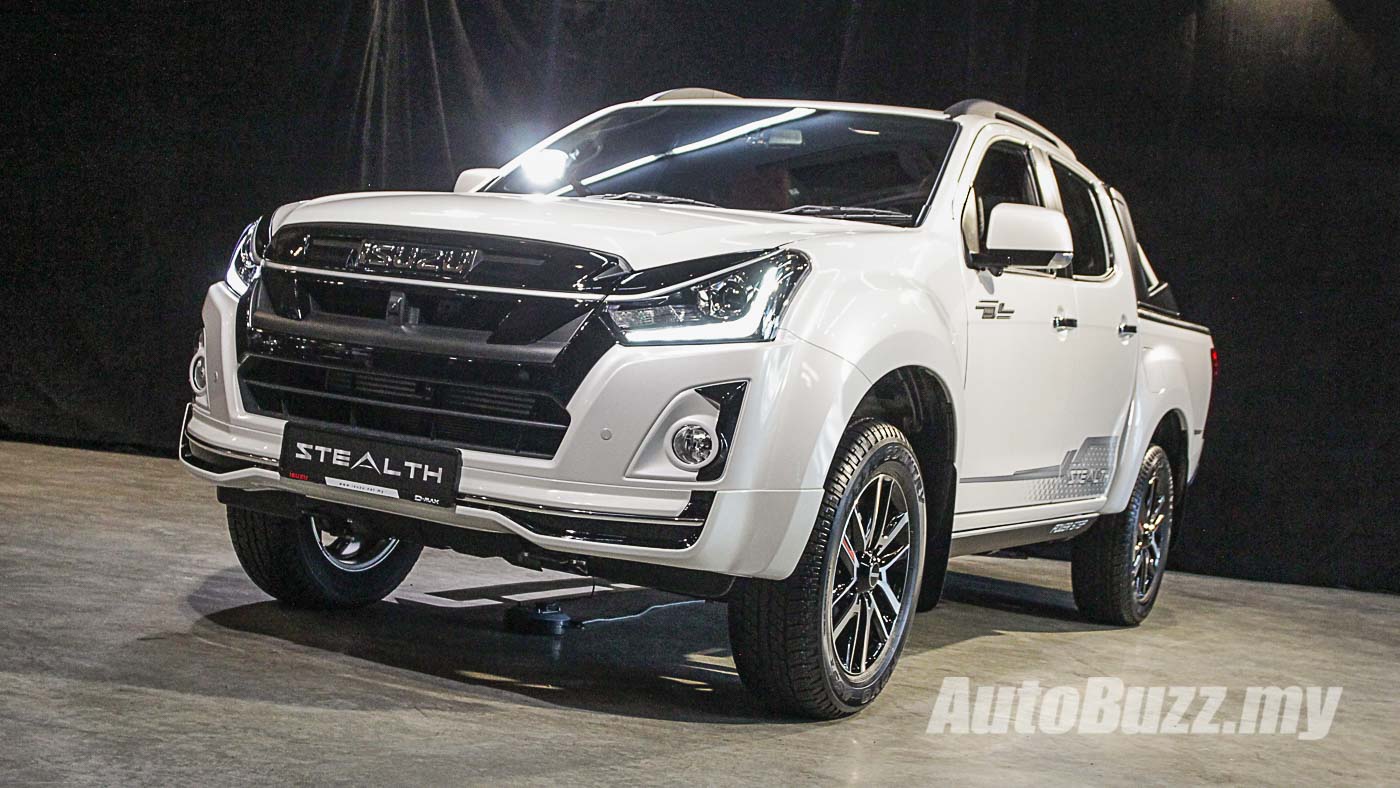 Isuzu Malaysia has just launched the new D-Max Stealth that’s based on the 1.9-litre turbo diesel model which we drove in Phuket, Thailand. With only 180 units available, the limited-edition model is priced at RM125,799.20 on-the-road without insurance.

Available either in Stallion Black Metallic or Silky White Pearl exterior colours, each model is accompanied with a 7-year unlimited mileage warranty. Those who register the D-Max Stealth by August will receive a free sports roll bar.

There are no performance upgrades in the Stealth, which makes 150 hp and 350 Nm from its 1.9-litre turbo diesel engine paired to a 6-speed automatic gearbox with Sequential Shift. Unlike the standard 1.9-litre variants of the D-Max, the Stealth does not come with a 6-speed manual gearbox.

As for the exterior, the bulk of changes are at the front. Instead of a massive chrome grille in the standard variants, the Stealth gets a blacked-out front grille with a silver line that stretches across the headlights. Further down, the Stealth also gets a new front lip extension with black accents. The fog lamp surrounds have also been blackened, along with the roof rails and rear bumpers.

At the rear, the Stealth now gets a damper for the tailgate which softens the tailgate opening and makes it extremely easy to close – you can literally do it with just one finger. Also enhancing the Stealth’s exterior are newly designed 18-inch wheels with a Stealth emblem on one of the spokes.

The icing on the cake has to be the powered side step, a first-in-class feature. When retracted, it’s so flush you wouldn’t notice anything there but open the doors and it will gracefully extend out, accompanied with welcome lights.

Inside, the cabin comes with red and black seats, with a mix of leather and fabric upholstery. The Stealth is also added with a first-in-class front and rear digital video recorder with a 32GB mini SD card.

Using motion detectors, the cameras can record a 140-degree view when the vehicle is parked or when it detects an impact on the vehicle. The recordings can be played back through the owner’s phone via WiFi and the IROAD app available on the Apple App Store or Google Play Store.

Another first-in-class feature in the D-Max Stealth is the Around View Monitor with 3D Image Guide. Using four cameras around the vehicle, it can provide either a bird’s eye view or a 3D view when the reverse gear is selected. The user can also manually activate or switch to different views with a switch placed behind the steering wheel.

Additionally, the Stealth is also equipped with a front parking sensor which operates up to speeds of 25 km/h. Once the vehicle slows down to 20 km/h, it will automatically reactivate. While off-road, drivers can opt to switch off the system with a Parking Sensor switch added next to the USB ports.