Home News Would you have the new Volkswagen Arteon R in Fastback or Shooting... 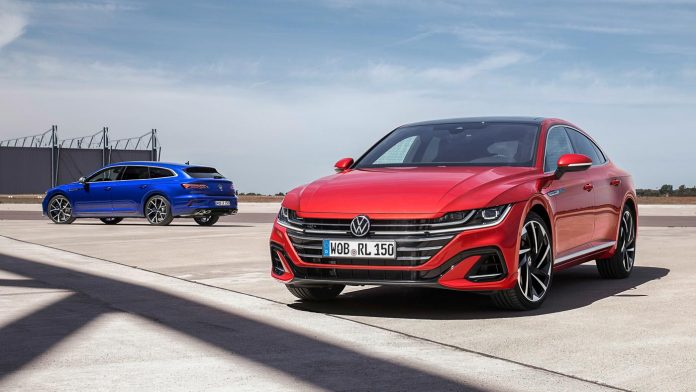 While we’re just about to get the Arteon here in Malaysia, Volkswagen has already given the four-door grand tourer a mid-cycle refresh, approximately three years after the global launch of the original Passat CC successor.

Changes are aplenty here, but the highlight of this update must be the introduction of a new full-fledged R variant. That’s not all, because we’re also getting two of them – Volkswagen has now introduced a Shooting Brake version of the Arteon, and it’s also available on the Arteon R!

Powering the Arteon R is the EA888 2.0-litre turbocharged inline-four engine, developing 320 hp and 420 Nm of torque. The engine is paired to a seven-speed dual-clutch DSG transmission, with power sent to all four wheels.

Aside from the R, Volkswagen is also introducing a new eHybrid plug-in hybrid version of the Arteon. It uses a 1.4-litre four-cylinder turbocharged engine paired to an electric motor for a combined output of 218 hp. Power is sent to the front wheels via a six-speed wet dual-clutch transmission.

The new Arteon eHybrid boasts an electric-only range of 53 km, thanks to its 13 kWh battery pack. Imagine hitting 140 km/h without having your internal combustion engine running!

Other powertrain options are region-dependent – Petrol options are a mix of 1.5- and 2.0-litre four cylinder engines with output ranging from 190 hp to 279 hp, while on the diesel side is a 2.0-litre turbodiesel mill putting out 150 hp or 200 hp.

Aside from the obvious roofline differences from the new Shooting Brake variant, styling changes on the facelift include a slightly tweaked front fascia, featuring a new light bar across the front grille, connecting the headlights via the daytime running lights. At the back, the taillights also gets a redesigned light signature.

Bumper designs are variant dependent, though it still looks pretty sporty even on the “Elegance” trim level. Alloy wheels start from 18-inches, up to 20-inch ‘Performance’ units on the Arteon R.

Inside, the dashboard architecture is largely similar to the outgoing model, though heavily restyled for a more modern appearance. Notably, the horizontal slats that runs across the entire dashboard are now replaced by individual air vents joined only by a single line – differentiating it from the Passat. However, even the Arteon can’t escape the fate of removed analogue clocks.