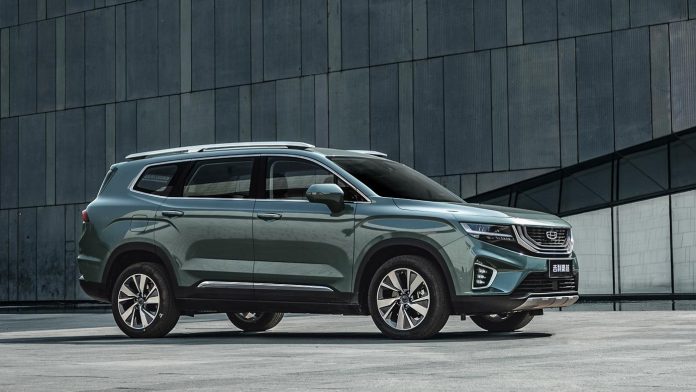 Geely has just introduced the seven-seater Hao Yue SUV over in China. The launch marks the brand’s first entry into the large SUV market segment, which according to Geely, is highly competitive in the region, dominated mostly by foreign brands.

In terms of styling, the Hao Yue is designed to portray a rugged muscular look, featuring multiple “tensile lines” such as the squared-off wheel arches, probably inspired by the Geely Icon. Although, compared to the Icon which we dubbed as a “design study made into reality”, the new Hao Yue trends towards “unprovocative and utilitarian”.

Up front, the familiar “Expanding Cosmos” grille has been rehashed, flanked by two slim headlights; the entire assembly fits into a large D-shaped “cut-out” that takes up the entire top half of the front fascia. At the back, the slim taillights are joined together by a chrome strip – the shape of the taillights mirrored lower down on the bumper cut outs.

Inside, a large freestanding 12.3-inch infotainment display steals the thunder away from a very pretty dashboard design, featuring the same infinity motif on the air vents like we saw on the Icon. A 12.1-inch LCD display functions as the instrument cluster, while above you also get a coloured heads-up navigation display.

The whole digital system is powered by Geely’s own high-performance E01 microprocessor chip, which enables features such as AI-powered voice assistant, and even control your smart home appliances at home remotely directly from the car.

The Geely Hao Yue can be optioned as a five- or seven-seater SUV. With all seats fully folded down, the rear interior can reach up to 2.2 square metres in size – the same as a king-sized bed. In terms of volume, the Hao Yue can swallow up to 2,360 litres of cargo.

Crucially, all seats in the Hao Yue are adjustable – even the third row seats on the seven-seater model has eight-way adjustable backrests. You can even step it up with a ‘VIP’ seat configuration, which comes with seven independently-adjustable seats!

Other occupant-friendly interior equipment include the three-zone climate control, as well as an air quality system featuring a CN95 grade high-efficiency air purification system that is also now present on the Proton X70.

Under the hood of the Geely Hao Yue is the brand’s latest flagship 1.8TD engine paired to the their own seven-speed DCT gearbox – similar to that found in the CKD Proton X70. The Chinese carmaker did not reveal any performance numbers on the Hao Yue, though from previous applications on other cars such as the aforementioned X70, the engine is capable of outputting 181 hp and 300 Nm of torque.

As for safety technologies, the Geely Hao Yue comes equipped with a Level 2 assisted driving safety suite. Using 24 individual sensors, the suite offers 17 drive assistance features, including an adaptive cruise control which can automatically follow, stop, and even corner at speeds of up to 150 km/h.

On the convenience front, the Hao Yue is equipped with a one-button automatic parking function. But if you prefer to do the parking yourself, a 360-degree panoramic camera system is there to help you look around the large SUV.