Originally introduced as a concept car at the 2018 Beijing Auto Show, Geely has officially unveiled the Icon in production-ready form at a design seminar in Nanjing.

Geely says that the Icon is designed “for a new generation of users, a generation that demands high-tech, inspiring vehicles”, and it seems like they got it spot on with the stark departure from Geely’s design language on their existing cars.

The styling of the SUV is a global effort by Geely’s design studios, with the initial exterior conceived by Geely Barcelona and interior by Geely California, further refined in Geely’s Shanghai studio into the final production version.

Inspired by application icons as the name suggests, the Geely Icon sports the same unapologetic squarish shape first introduced on the concept car. Geely says that the production version of the Icon retains nearly 90% of the features shown on the concept, a testament to the close work relationship between the engineers and designers.

At the front, nothing much has changed from the concept. The futuristic rendition of Geely’s expanding cosmos grille dominates the front facade, flanked by the infinity loop headlamps. The slim daytime-running lights are embedded in the the slit just underneath the hood cover.

The daytime-running lights extend to the side of the Icon, and are continued by the sharp character lines that turn 90-degrees downward and back to the wheels – a design motif that is mirrored above the rear wheel arch.

The pillars on the SUV have been blacked out, along with the roof to create a canopy-style design. Changes to the side profile include a new simplified, or dare we say, regular looking wheels compared to the concept. The flush pop-out door handles have also been repositioned, hinting at the removal of the suicide doors.

At the rear, the expanding cosmos motif is repeated on the lower rear fascia, while the infinity loop design is used once again on the taillights. The taillights does away with the three-dimensional look, and is replaced with a slightly larger enclosure.

The minimalistic approach to the styling continues on the interior of the Geely Icon. The dashboard is dominated by two screens – one for the instrument cluster and another for the GKUI infotainment system.

The infinity loop motif is also found on the interior with the airvents, door trim pieces, as well as the cup holder moulding.  Overall, the interior design remains clean and uncluttered throughout. We particularly like the brown and white interior colour scheme!

The Geely Icon will ride on the B-segment Modular Architecture (BMA) platform, which underpins the Bin Rui sedan and Bin Yue SUV.

Geely did not reveal any other technical details during the media unveil. Based on previous BMA-based vehicles, we can expect the Icon to feature Geely’s 1.0-litre three-cylinder turbocharged engine, as well as the 1.5-litre turbocharged engine co-developed with Volvo, producing 177 hp and 255 Nm of torque.

The BMA platform also allows for the use of plug-in hybrid, hybrid or mild-hybrid powertrains; We won’t be surprised to see a PHEV version of the Geely Icon as well. 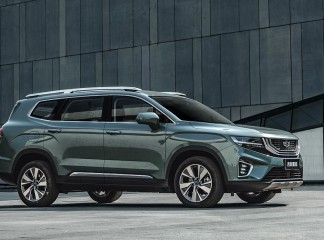