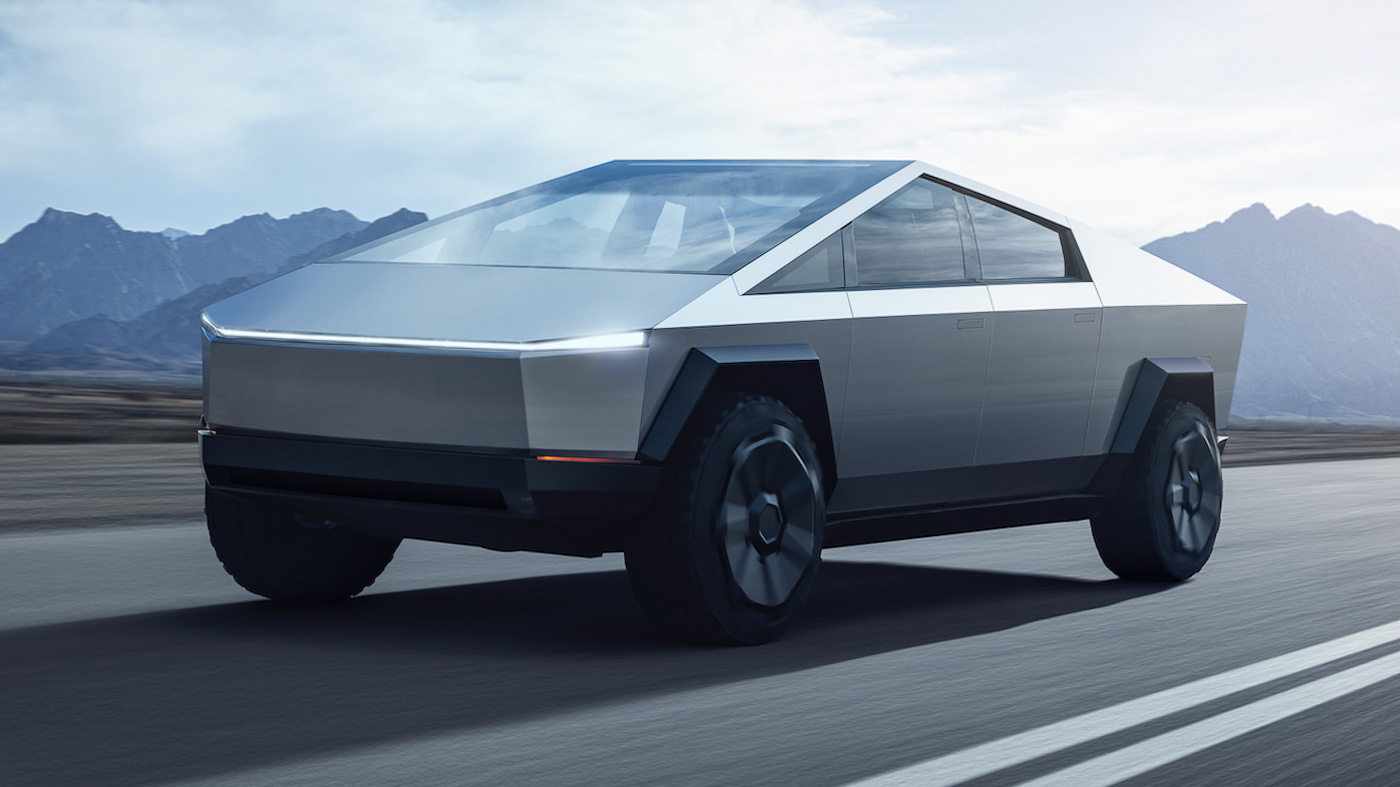 Yes, this is actually Tesla’s latest vehicle, the Cybertruck, and not a movie prop. Don’t worry, we did a double take too.

Tesla today unveiled their long-awaited pick-up truck in Los Angeles, separate from the ongoing auto show in their own bizzare event filled with virtual robots and people dressed in sci-fi-esque outfits. Fitting with the whole Blade Runner theme of the truck, we suppose.

We’re just gonna say it – the styling of the Cybertruck is bonkers. There are absolutely zero curves on the outside, which makes it look like a low-poly video game object or brutalism design taken to the next level.

Tesla says that the body is made up of ultra-hard 30x cold-rolled steel. It’s said that the material is strong enough to withstand a 9 mm round, and a sledge hammer is even used on stage to demonstrate its hardness. Sure enough, the Cybertruck’s body came out unscathed.

The Cybertruck’s windshield and windows are made out of Tesla Armor Glass, which is also supposed to be super strong and impact-resistance.

However, it probably isn’t as strong as Elon Musk has hoped for, as both side windows shattered when Tesla’s head of design threw a metal ball at it during an on-stage demonstration. Oops. Also, on a side note, does the Cybertruck not come with any windshield wipers?

The top-end model is equipped with Tesla’s latest tri-motor ‘Plaid’ powertrain. Zero to hundred km/h is done in less than 2.9 seconds, and standing quarter-mile in 10.8 seconds.

The tri-motor model has a range of over 800 km based on the EPA cycle and has a towing capacity of over 6,300 kg, while the entry-level single-motor model does 400 km and can tow about 3,400 kg.

The Cybertruck uses an adaptive air suspension as standard on all four corners, with the height adjustable by 10 cm in both directions up to a maximum ride height of approximateley 40 cm.

The Cybertruck have a 1.98-meter long load bay, and is capable of ferrying a payload of up to 1,588 kg. Total lockable exterior storage space is over 2,800 litres, including the vault, frunk, and sail pillars.

Inside, the Cybertruck takes Tesla minimalism one step further. The dashboard is completely replaced by a slab that resembles a marble tabletop, and there is nothing else on it other than a jet fighter-styled steering wheel and a 17-inch touchscreen display at the centre.

The Tesla Cybertruck seats six adults, and can be specified with Tesla’s Autopilot system which includes full self-driving, autopark, and trailer docking.

Being a Tesla, the Cybertruck can also make use of the company’s supercharger network which can charge the truck at up to 250 kW. The truck itself can also be used to charge other things, with 110v and 220v sockets on board.

Oh and before we forget, Tesla is also making a quad-bike to go with the Cybertruck, but no specifications were revealed at the event.