Fans of convertibles and cabriolets have a new eye candy as Aston Martin has just teased the Vantage Roadster on Twitter!

Aston Martin unveiled the second generation Vantage back in 2017 with a stark new design. Drawing inspiration from the non-production DB10, the current Vantage features slimmer headlights, larger signature Aston Martin grille and light-bar taillights, which we quite fancy.

But since its launch, the Vantage has only been available in coupe form. However, it seems like we will get our hands on a cabriolet version very soon.

The drop-top version of the Vantage still carries the sleek body shape of the coupe version, and from what we can see, only the hard top has been swapped with a electronically-retractable fabric cover.

Aston Martin hasn’t revealed any information for the Vantage Roadster as it is called, other than a few photos with the words “Opening Spring 2020” plastered on the body of the development sample. Given that Spring is just about five months away, we can expect the design and specifications to have been finalised so it’s only a matter of time before we hear more from Aston.

As the roadster is based on the regular coupe variant with a few additional tweaks, there’s pretty much no doubt that the roadster will also be powered by the same AMG-sourced 4.0-litre bi-turbo V8.

As a quick recap, the Aston Martin Vantage pushes 503 hp and 685 Nm of torque to the rear wheels, and takes 3.6 seconds to reach 100 km/h from standstill. However, with the required additional strengthening of the body due to the removal of its roof, we expect Vantage Roadster to be slightly heavier hence slower than the coupe.

The soft-top Vantage will also most likely inherit the 8-speed ZF automatic box from its coupe twin. Fingers crossed that Aston Martin will include the optional manual transmission for the Roadster as well!

According to Autocar, Aston Martin’s convertible versions usually command a higher price of approximately 8% than its coupe counterparts. With the Vantage priced at RM1.6 million (after tax before options), you do the math and guess what it’ll cost when (or if) it reaches our shores! 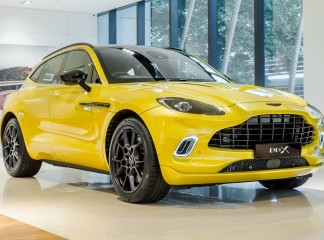 The Aston Martin Vantage Dark Knight Edition is the last unit in M’sia to get the Sea Storm paint job!