Porsche seems determined to tickle our heartstrings with a rather “comprehensive teaser” on what we can expect from the fully electric supercar ahead of its global unveiling next month.

First of all, it’s really cool that the entire interior is now almost void of buttons, knobs and levers as they’re replaced entirely by touch sensitive controls – leaving only very few for the window controls and on the steering wheel.

While the new 16.8-inch instrument cluster may still appear to feature five separate dials, the classic Porsche DNA ends there. The customary rev meter displayed on the centre dial is now replaced with a power meter (for obvious reasons).

Different displays are projected when either one of the four driving modes – Classic, Map, Full Map, Pure – are engaged. If you observe closer, the new digital instrument cluster also houses the lighting controls and access to the car’s drive controls and suspension setup on each side of the screen.

The conventional gear lever position has been relocated to where the ignition would normally be, to accommodate a new 8.4-inch touchscreen display for access to the air conditioning and multimedia functions. That should leave Porsche with a few questions to answer.

What’s quite amusing to me at least is that the engine start button has been redesigned to look like an on/off switch for appliances – something the Taycan isn’t too different from.

The only familiar sight in this rather futuristic but typically subdued Porsche interior is the 10.9-inch display in the middle, with an optional unit for the passenger – a big swipe at Ferrari’s much smaller passenger display.

Staying true to its environmental-friendly nature, the Taycan can be optioned with a leather-free interior; replaced instead by a microfibre material made of recycled polyster fibres called “Race Tex”.

As for the floor carpets, they’re made of recycled fibre sourced from used fishing nets, among other things. 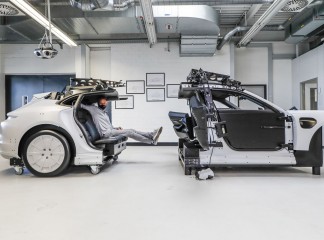 The Porsche Taycan just set 13 EV records in one day