Home News All-new Audi A6 offers six-cylinder option, but comes at a price At RM 589,900, you could say that the new Audi A6 3.0 TFSI quattro will likely be an acquired taste in the mid-sized executive saloon segment, but only if you must have a six-cylinder engine, something which BMW, Mercedes-Benz and Volvo do not currently offer in their CKD line ups.

Like the A8 L, the A6’s 3.0-litre turbocharged V6 is identical with the same output of 340 hp and 500 Nm, assisted electrically by a mild hybrid system comprising a belt alternator starter motor and a 10Ah lithium-ion battery pack. However, the similarities end with the transmission; the A8 L uses a conventional 8-speed automatic whereas the A6 deploys a 7-speed dual-clutch gearbox (which Audi dubs S tronic) and quattro all-wheel drive with ‘ultra-technology’ for improved fuel efficiency.

The quattro ultra-technology system is developed for models with longitudinally front-mounted engines. It offers the efficiency of a front-wheel drive system and would only engage all-wheel drive when situation warrants, but reacts quick enough before the wheel reaches traction limit, otherwise the rear differential remains decoupled until called into action. But don’t think for a second that the A6 is a fuel-sipping hero, idle to 100km/h is dispatched in a rather rapid 5.1 seconds. By the way, all-wheel steering is also standard on the car.

The interior theme of the 8th generation A6 takes after the A8 with the touch-centric MMI navigation plus interface taking centre stage alongside Audi’s excellent virtual cockpit and heads up display. Leather surfaces are aplenty in the cabin, as you’d expect for the price, contrasted against aluminium inserts and a black headliner. B&O premium audio system and panoramic sunroof are other interior highlights. 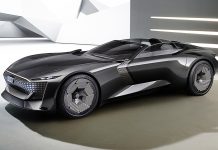