Home News The all-new BMW Z4 has arrived in Malaysia, yours for RM480k 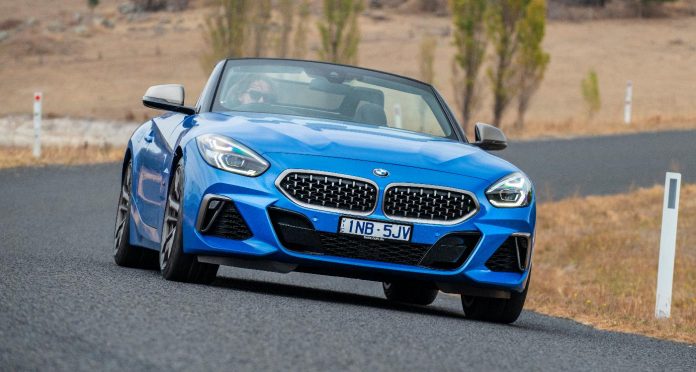 It’s almost unfathomable to think that BMW’s latest Z roadster very nearly didn’t make it to production, if not for the ‘collaboration’ with Toyota which eventually satisfied business objectives. It also explains the two-year lull after the last generation E89 ceased production in 2016.

But all is looking sunnier now, literally and figuratively, as the Z4 returns to our Malaysian roads once again. For this instalment of the roadster, BMW has gone back to basics, ditching the complicated folding hard top and opting for a quick-folding canvas roof. In fact, sunshine to shade can be achieved in 10 seconds – the fastest in the segment, according to BMW. Useful when the sky starts bucketing.

For Malaysia, only one variant is offered – the sDrive30i M Sport. As its 30i moniker suggests, under its long hood is a B48 2.0-litre turbocharge four-cylinder good for 258 hp and 400 Nm, mated to an 8-speed ZF automatic. Idle to 100km/h takes 5.4 seconds, while the top speed is 250km/h (limited), plenty fast on paper, and subjectively it’ll feel even faster with the top down, so no qualms about the performance here. The 1.5-tonne two-seater Z4 30i rides on passive M Sport suspension complemented by Variable Sport Steering.

The G29 third generation Z4 is longer, wider and slightly taller than before. There will be no confusing this with the last one, its vertically aligned LED headlamps and new grille motif (inspired by the 328 Mille Miglia race car) are dead giveaways. Even from the sides and particularly the rear, the change is substantial. We think its best view is from rear three-quarters; the Z4’s slim-cut tail-lamps, integrated spoiler and wide haunches looking so seductive.

The interior continues the minimalist theme like with past Z4s, but it now sports the latest version of BMW’s Live Cockpit Professional with touch-sensitive iDrive display and a fully-digital driver’s instrument panel a la the G20 3-Series. The new Z4 is also offered with the Digital Key function utilising NFC, if you have a compatible Android smartphone (e.g. a Samsung S9), you won’t need to bring along the physical remote key fob anymore, and the digital key can be shared with up to five persons.

Another novel feature is the Reversing Assistant; it is part of the Intelligent Parking Assistant package which takes over the steering from the driver in manoeuvring the vehicle out of tight alleys. BMW ConnectedDrive services and Qi wireless phone charging are also part of the standard kit found in the Z4.

You can have the all-new Z4 in four different exterior colours – San Francisco Red, Misano Blue, Black Sapphire and Alpine White, matched with interior options of Black décor, Magma Red or Cognac, all with black stitching.

BMW Group Financial Services is offering a Balloon Financing Plan with monthly instalment plans starting from RM 5,478 (based on estimates of an 80% loan on a five-year tenure), otherwise, its regular retail price is a cool RM 479,800. Hmmm…we wonder how much would the Z4-based Toyota Supra cost?