Home Reviews The all-new BMW 3 Series: Impressions of the G20 from Portugal 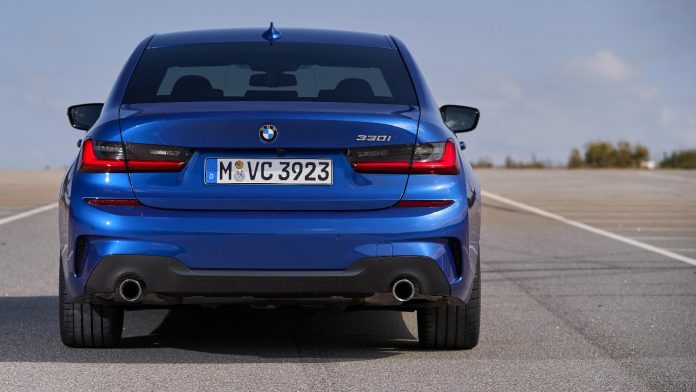 BMW describes the 3 Series as the heartbeat of the brand. We think it goes deeper than that. If there’s a car that reflects the soul of BMW, it has to be the 3 Series. It goes without saying that the original sports sedan remains as BMW’s most popular model despite the deluge of SUVs and crossovers.

Which is why every new generation of the 3 Series is greeted with deep interest and scrutiny, not only by enthusiasts but by the car-buying public in general. What is BMW bringing to the table this time around, is the new 7th-generation 3 Series the car to beat once again ?

The styling of the G20 generation was always going to be evolutionary because there’s only so much you can reinvent a four-door, three-box saloon. That said, BMW has done more than enough to distinguish the G20 from its predecessor on the basis that you can tell them apart quite easily. But is it pretty?

While the G20 may not jump at you from images, in the metal, it harnesses a lot more aggression with more contours on the sides and bonnet, the fenders also flare out more while the front and rear ends have eye-catching cosmetics. Even the good old Hoffmeister kink on the C-pillar has a new presentation with the rear door frame having an exposed glass edge.

The kidney grilles are now technically a single piece as the chrome surrounds have been joined, they are also larger and wider. The full-LED headlamps sport a kink that harks back to the E46, with the outlines of the daytime illumination expressing a focused scowl.

Yet it is the shapely but tidily rendered rear end that will get most attention. As the G20’s stance is wider (at both ends), the view from the back is sporty, not surprisingly. The taillamps are slim with the sculptured L-shape lighting element accentuating width, contrasted against a recessed smoked housing. The boot also sports an upturned trailing lid that forms a natural spoiler. Nice.

If the exterior is an evolution, the interior is a revolution. There is where the departure from the previous generation is most obvious – the G20 following the footsteps of the 8 Series. The flowing aesthetics of old have made way for sharper, diamond-cut outlines that shape the primary elements in the cabin. BMW also arranged the controls within defined clusters, so you now have the start/stop button where the glossy gear selector and iDrive controller reside. The climate control and multimedia buttons have swapped places as well.

There’s more technology fitted in the car as standard, as you’d expect from a premium German product. What greets you is the new 12.3-inch digital driver’s display (as part of the BMW Live Cockpit Professional package) and the 10.25-inch touch-and-gesture sensitive Control Display (what used to be referred to as iDrive display) running on BMW’s latest Operating System 7.0.

We are not so sure about the symmetrical graphics on the driver’s display, on the one hand it is a welcomed break from the past, but the anti-clockwise rev counter really takes some getting used to, especially when there’s no option to change to more familiar circular virtual dials. Otherwise, BMW’s iDrive user interface is probably still the best in the business – snappy, logical but getting a bit more complex with every iteration.

The addition of a voice-activated personal assistant is somehow of a commercial necessity these days, and like others before it, BMW’s version will get better over time and since the operating system can now be updated over the air, we won’t judge it too harshly for now.

The gains in overall dimensions of the G20 means that there are now more shoulder room but the increase in width also makes for storage spaces that are more accommodating, particularly the door pockets and centre console area. There’s more rear legroom too with the addition of 41 mm to the wheelbase (to become 2,851 mm) and the rear seats do feel more supportive to travel long distances in.

What about perceived quality? The F30 can be patchy in certain areas but also properly premium in others. The G20 is a step up in that the quality is more consistent across the board and more importantly, that much more attractive to look at. Take for example the door cards, in the F30, the presentation is subdued even if the build quality is competitive, whereas in the G20, you can find different materials that contrast each other, and while they aren’t necessarily better than what’s found on an F30, they are more visually appealing.

This is where BMW’s magic sauce usually lies. The G20 starts with a 25% stiffer structure overall and suspension mountings (up to 50%!), which allows the G20 to run 20% stiffer spring rates without compromising comfort, BMW claims. The engineers also widened the front track by 43mm (and upped the wheel camber too) and the rear by 21mm, all substantial increases.

It speaks volumes that BMW elected not to launch the 330i with adaptive dampers (the M340i xDrive M-Sport had them though). Instead you’ll find newly developed ‘lift-related’ passive dampers on each wheel. We will let BMW literature explain the complex workings of these dampers:

“The introduction of lift-related damper control reduces body movement perceptibly when evening out vibrations caused by bumpy road surfaces and dynamic cornering, which paves the way for sporty, authoritative handling. The system adds extra hydraulic damping at the front axle and a compression limiting system at the rear. It is continuously variable and adjusts the damper firmness progressively according to the changing spring travel. This prevents excessive body dive when driving over large bumps and so avoids uncomfortable, nervous damping response.

At the front axle, the first line of defence against body vibrations is an additional element within the inner sleeve of the damper. Only when greater loads are encountered does the entire damper become active. The rear dampers also adapt continuously to the driving situation. Even when the vehicle is carrying heavier loads, they provide the ideal degree of hydraulic damping for the situation at hand.

Lift-related damping is as an active element of the suspension set-up and is designed specifically to optimise the balance between sportiness and comfort. However, the positive effect of progressive suspension adjustment can also be felt in less demanding circumstances; even small bumps can trigger damper lift, which makes a noticeable difference.”

All of this is further complemented by aluminium front control arms, beefed up subframes and recalibrated kinematics for a more precise steering.

For Malaysia, the launch variant is expected to be the fully imported 330i M Sport with 258 hp and 400 Nm, an increase of 6 hp and 50 Nm over what the previous generation 330i could muster. The raise output of this updated B48-series turbocharged 2.0-litre four-cylinder engine is mainly due to improved cooling in the engine bay, it is mated to the slick 8-speed ZF automatic – now with shorter gearing for lower ratios and faster shift times. Idle to 100 km/h for the 330i takes 5.8 seconds, with a limited top speed of 250km/h. No complaints there.

Whenever a car does exactly what you want it to do, you know you have something special in your hands. The last generation F30 was a 3-Series that catered for many, it rode well and handled competently, but for the G20, there is a renewed focus towards driving.

Even on the passively damped 330i M-Sport, the balance struck between sporty and comfort is near perfect right off the bat. Compared to the F30, there is a noticeable increase in composure through the steering when the 330i settles into a tight corner. Resistance to roll is high but the car never feels too stiff or harsh when running over bad surfaces. The ‘calmness’ of the front axle translates into a lighter, ‘quieter’ steering feel, which is also far more delicate in response.

And because of that, the front end of the new 3 Series is that much more willing to go where you point the steering at, it simply shrugs off road cambers and imperfections as if they weren’t there. If the handful of laps on the Portimao circuit in the 374 hp and 500 Nm M340i xDrive is anything to go by, there is a lot to look forward to in the G20-generation 3 Series.