A Toyota dealership in Arizona, USA, recently made the “remains” of the new Toyota Camry its prime showpiece after it was squashed between two semi-trailers – a breed of enormous long haulers which are indigenous to the land.

Fortunately, the occupants, an employee of the dealership and a customer he was chauffeuring, escaped from the wreckage unscathed. It was even stated on the dealership’s Facebook page that the “Camry’s cabin was still intact and that all four doors still worked properly.”

The wreckage has since gained viral attention on social media with the General Manager of the dealership claiming that it’s the first thing they show customers who walk into the showroom.

The bizarre move, although speaks volumes of Toyota’s impeccable engineering and safety standards with the new Toyota New Global Architecture (TNGA) platform, was apparently red flagged by Toyota Japan’s officials who happened to be visiting that day, according to a report by The Drive.

But it was thought to be the most sound piece of advertisement hence the orders to remove the wreckage from the showroom floor fell on deaf ears. How cool is that?

That being said, it’s wise to note that the Camry, as structurally sound as it is, shouldn’t be seen as completely invincible because the dealership did point out that the accident occurred during morning rush hour which meant that the vehicles involved were probably crawling at low speeds.

Had the semi-trailer smashed into the Camry at a much higher speed, it’s likely that only Superman could’ve saved the occupants. 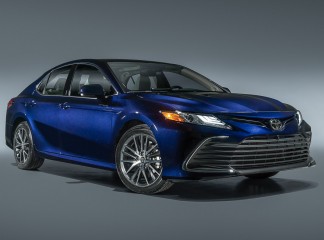 Video: Here’s how Toyota’s TNGA is transforming their new cars! Can the new Toyota Camry justify its updated price tag?