Home News Here’s a car that’s been converted specially for the driving and cycling... It’s called the FitCar PPV. Based on a standard Audi A4 Avant 2.0-litre TFSI, it’s the world’s first calorie-burning car – an alternative mobility solution for those who keep count of how many steps they’ve completed in a day but would never commit to a proper workout.

“The Audi A4 Avant was chosen for its brilliant ergonomics, allowing for a comfortable cycling position. Our ambition is for car manufacturers to adopt this technology or for us to offer it as an aftermarket conversion,” said Founder and Managing Director of BPO, Oscar Brocades Zaalberg, Dutch engineering partners of the project.

In the video, you’d see that the car’s throttle pedal has been replaced by a bicycle pedal mechanism and mated to a flywheel, which generates an electronic pulse to engage the accelerator. They first tested this system on a Smart car.

This doesn’t mean the engine has been completely removed. It’s still there to deliver manufacturer specification performance and fuel economy; only that it’s now operated by an “active pedaling motion” instead of an accelerator pedal.

“Our studies suggest a calorie burn-rate of more than 300 per 30 minutes. We are increasingly time-poor and unfit, the FitCar PPV provides at least part of the solution to these two problems for those of us wishing to exercise more but done have the time for it,” said investor, Nasser Al Shawaf.

There are three simple settings to operate the FitCar PPV system. ‘Drive Slow’ when in slow moving traffic, ‘Drive Fast’ for highway speeds and ‘No Drive’ for stationary traffic where it still allows you to continue exercising by using the pedals.

There is also a rotary dial on the pedals to adjust the resistance, depending on what sort of pedal work out is required – from easy to difficult.

FitCar PPV is patented internationally and is awaiting approval from the Netherlands’ authorities for road use across Europe. 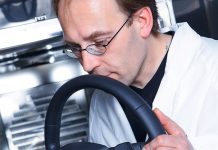