Having set the record as the fastest in its segment around the Nurburgring with a time of 7 minutes 51.7 seconds in the Stelvio Quadrifoglio, Alfa Romeo’s first SUV in its history, they’ve gone on to introduce new editions of the Stelvio and Giulia “NRING”.

The Nürburgring Limited Editions were created to celebrate the historic bond between the brand and the circuit, recently given new life by the new Quadrifoglio model’s thrilling performances on the Nurburgring.

Available specifically in European, Middle Eastern and African regions, only 108 units of each model will be available and they’re intended for collectors and the most loyal Alfa Romeo customers.

On the outside, the “NRING” models are finished in Circuito Grey Livery, carbon ceramic brakes, carbon fibre front badge and side skirt inserts. The Giulia in particular, premiers a new bare carbon roof.

Each model is accompanied by a 1:18 scale model upon collection. When the vehicle is being presented to its new owners, a Welcome Kit will be given. It includes Sparco racing gloves, a customised soft shell jacket, sports bag in the Alfa Romeo pattern and “Quadrifoglio” cuff-links.

There will also be original footwear inspired by race boot designs created by Car Shoe, an Alfa Romeo licensee for the “Quadrifoglio” capsule collection.

The “NRING” versions will have specific “Authenticity Certification” issued by FCA Heritage. They’re normally only issued for historic cars, immediately giving them genuine “Instant Classic” status, placing them amongst the vehicles ranked as collector’s items. 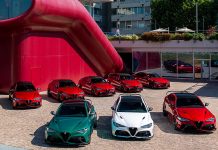 Alfa Romeo will launch a new car every year until 2026, before going full EV