There are pick-up trucks, and then there’s the Ford Ranger – the pick-up that constantly redefines what trucks are capable of, both in the wild and within the confines of the urban jungle.

In the new and updated Ranger XLT Plus, Ford is once again leading from the front with class-leading features that no other pick-ups can lay claim to.

With an exceptional output of 180 hp and 420 Nm from just a 2.0-litre engine, the all-new single-turbocharged four-cylinder diesel unit in the Ford Ranger XLT Plus not only trumps other 2.5-litre diesel engines in performance, fuel efficiency, emissions and refinement, but its lower cubic capacity means significant savings on annual road tax.

The all-important supporting act of the all-new powertrain of Ford Ranger XLT Plus is its 10-speed automatic transmission with SelectShift – a first for pick-ups in this segment. Due to its 10-speed configuration, this newly-developed gearbox has a suitable gear for every occasion, whether it’s crawling on a river bed or cruising on the highway, in 4WD or 2WD mode.

The wider spread of gear ratios also brings about greater fuel efficiency through reduce engine revs at higher speeds, not to mention drivetrain refinement as well.

In-car connectivity matters in the digital age, and it is no different for pick-up owners. The Ranger XLT Plus is equipped with Ford’s cutting-edge SYNC 3 infotainment system.

Apart from functions such as voice command, GPS navigation, Bluetooth connectivity, the 8-inch touchscreen also shows the reverse camera and status of the dual-zone climate control. If that’s not enough, Apple CarPlay and Android Auto are standard.

Even though the Ranger is built Ford tough to take on the most challenging terrains, Ford prefers to do the heavy lifting for its owners. Take for example the ingenious Easy Lift Tailgate which requires only the strength of a finger to operate what used to be a task that required both arms.

By incorporating a torsion rod to support the weight of the tailgate, Ford has managed to make pick-up trucks that much easier to live with.

While the new Ford Ranger XLT Plus comes loaded with functionalities that can only be found on premium vehicles, owning a Ranger is also knowing that you have a pick-up truck with proven 4×4 off-road performance, built on a robust chassis with best-in-class water wading capability as well as a cargo payload that shades other trucks.

It is all about winning

Whether you appreciate the Ranger XLT Plus for its luxurious leather seating or admire its ability to go-anywhere while looking smart and stylish, it is undoubtedly the most complete and best value-for-money pick-up that stands out in a crowded segment.

In short, winning doesn’t come any easier with the Ford Ranger XLT Plus. 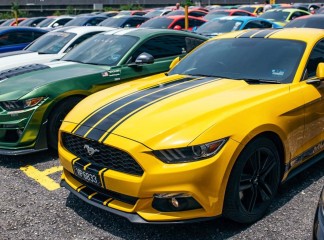