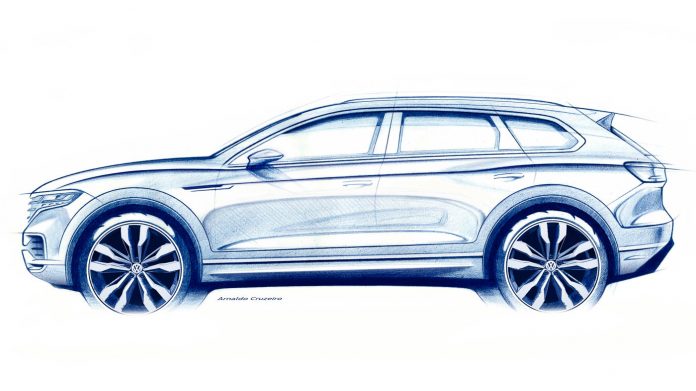 Volkswagen has released a sketch image of its latest product – the third-generation Volkswagen Touareg. The seven-seater SUV will make its global premiere on 23rd March 2018 in Beijing, the firm’s largest individual market.

The new flagship SUV will encompass the brand’s ethos through its expressive design, innovative technologies and dynamic handling capabilities. The new SUV will ride on the group’s MQB Modular platform that is lighter, sturdier and safer than the outgoing model.

New innovations to be debuted on the new Touareg include an Innovision Cockpit that is said to be one of the largest in class, new powertrain choices, air suspension, roll stabilisation and even rear-wheel steering. Expect superior off-road performance like its predecessors too.

China, the world’s strongest growing SUV market is expected to double its sales volume of the Touareg by 2023. Perhaps that is why Volkswagen decided to hold its global debut in Beijing instead of Geneva.