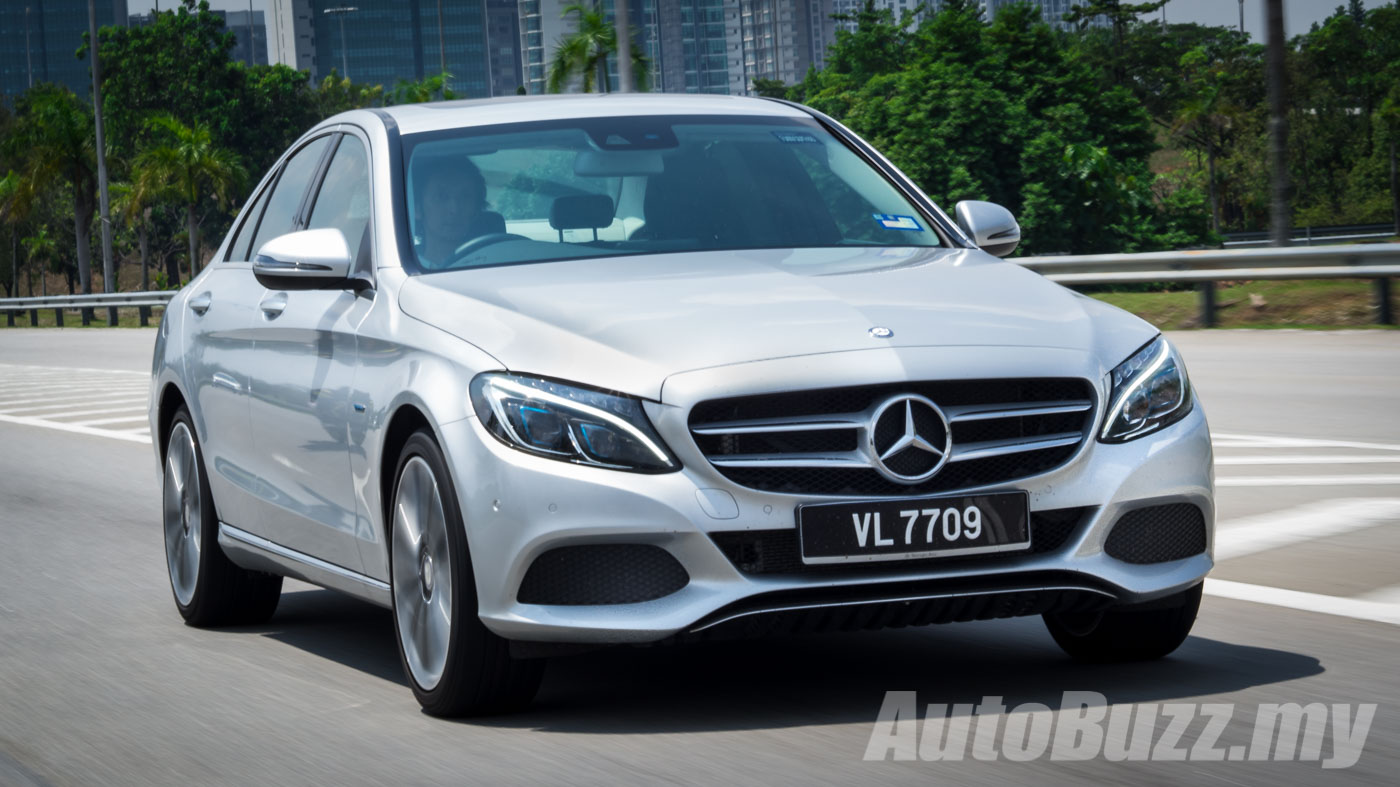 “It can’t be a hybrid, it doesn’t look like one,” mutters a friend. I don’t blame him because there used to be a time when every hybrid car looked almost the same with a peculiar silhouette but now, they look just like any other ordinary vehicle and the Mercedes-Benz C 350 e is no different. Apart from the McLaren P1, Ferrari LaFerrari, Porsche 918 and a few other insane hybrid hypercars, the more pedestrian C 350 e is pretty much reserved in its presentation, allowing you to blend in with the, well, dirtier non-hybrid vehicles on the road.

Same goes to the Volvo XC90 T8, BMW 330e, and the BMW X5 xDrive40e – they are just as frugal as the earlier hybrid pioneers, if not better, yet they pack a serious punch with colossal torque figures that eclipse the supercars of yesteryear. Furthermore, locally-assembled hybrid cars are granted special tax relief from the Malaysian government, which explains why the C 350 e is cheaper than the non-hybrid C 300.

The C 350 e’s price advantage over the C 300 led to the exit of the latter from Mercedes Benz Malaysia’s portfolio, effectively making the C 350 e the range-topping non-AMG C-Class in Malaysia. There are three trims to choose from but even in the cheapest Avantgarde model like ours, the equipment level is impressive.

As standard, it rides on fancy air suspension as it rolls on a set of flashy 19-inch wheels. And then there’s a sunroof, tri-zone climate control, a Burmester audio system, powered front seats and powered steering column to name a few, so there’s no such thing as a “base” C 350 e.

Externally there’s little to set the C 350 e from a regular C-Class but upon closer inspection you’ll discover the blue mascara inside the LED headlamps and the same shade of blue can be seen on the brake calipers peeking through those turbine-style alloys. And if you opt for a darker shade of paint you’ll miss to notice the additional charging flap on the rear bumper; very subtle. What’s more, if you top up a few thousand more you’ll receive AMG wheels and bumpers, a flat-bottomed steering wheel, surround view camera, a bigger Comand screen and a more extensive sunroof.

WHAT’S UNDERNEATH THAT PRETTY DRESS?

Having an electric motor on board means the car also has to accommodate an extra power source and for that reason the boot space has shrunk from 480 litres to 355 litres to make way for the 6.38 kWh battery pack. However, the rear seats’ backrest do split 40/20/40 and fold down to accommodate longer items.

The rest of the cabin is unchanged from the regular W205 C-Class – featuring excellent build quality, classy design and ambrosial leather but we reckon you should splurge the extra “moolah” and get the AMG Line for the extra swish carbon trim, panoramic glass roof and that classy analogue clock. It’s those little extra bits that make a huge difference to the overall cabin ambiance.

WALK THE WALK, TALK THE TORQUE

So how does 600 Nm feel like? Surprisingly sedated. Even if you do set the driving mode to its sportiest setting, the torque is very well managed almost to the point that you think Mercedes might have been over exaggerating about those figures. Nevertheless, the progress from low to mid range is pretty relentless and overtaking slower vehicles is nothing more than a flex of your right ankle. Don’t get me wrong, with a 0 to 100 km/h time of 5.9 seconds the C 350e is a proper quick car – it’s just that you don’t feel the surge from behind the wheel.

With that much grunt Mercedes still haven’t forgotten about the fuel saving part. As with most hybrid cars, the aim is to use as little fuel as possible and as such, Mercedes has come up with a haptic accelerator pedal to assist you to drive economically. It may sound gimmicky but it actually works. In E mode, they’ve added a midway pressure point on the accelerator pedal to refrain you from firing up the petrol mill and you will also feel a double tap from the pedal telling you to chill and ease off the throttle.

Mercedes claims that you can travel up to 31 km with a fully charged battery (which takes less than three hours to charge using the standard three-pin charger) but in a hot and humid Malaysian afternoon, yours truly only managed to get 20 km out of it before the engine was awoken to keep the car running. Nothing spectacular if compared to the rivals and the transition from electric to petrol is not the smoothest  but replenishing the battery using the Charge mode is quite fast, even if the trade-off meant burning more fuel.

Ride on the air suspension is supple on most occasions although don’t expect it to glide over rough surfaces like an S-Class as those devilish potholes still send jolts to the occupants’ buttocks. Throw it around fast corners and it stays level but the C 350 e doesn’t feel like it wants to play on winding roads and it doesn’t hide its weight penalty over its non-hybrid sibling as well as its Munich counterpart.

If you enjoy a spirited drive once in a while the C 350 e is a punchy performer even though there’s not much fun to be had when the roads start to tangle. The steering is sharp and there’s plenty of grip but the safe and secure handling may not beguile the more avid drivers out there.

However, if you’re a more laid-back type of driver looking for a classy compact premium hybrid sedan, nothing comes close to the C 350 e. It looks great, the spec sheet is long and the abundant torque means it’s effortless across the rev range. The limited cargo space in the boot may be a deal breaker if you have a growing family but that’s just a small trade-off considering that the C 350 e Avantgarde is just RM 2,000 dearer than the less powerful C 250 AMG Line.