Home News Lexus will be making a 7-seater Lexus RX L, to debut at... 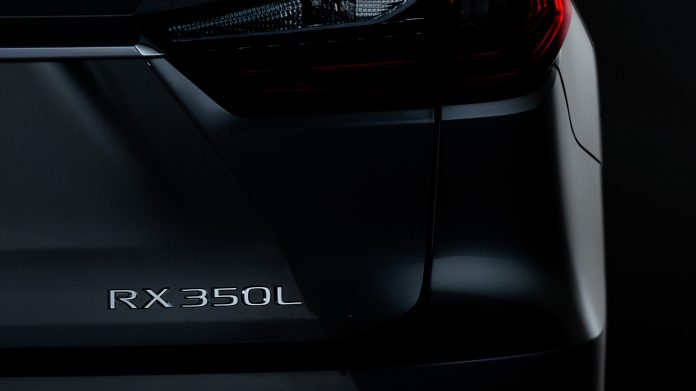 Since the inception of the Lexus RX in 1997, the luxury SUV quickly became the brand’s top-selling model, selling over 2.2 million units across three-generations (first to third). It was also a no brainer deal when the Japanese luxury carmaker spawned the fourth-gen RX which happens to be on sale here in Malaysia.

However, Lexus is looking to expand its market even further by offering a seven-seater option for the RX! Dubbed as the Lexus RX L, the new three-row SUV will make its debut at the 2017 Los Angeles Auto Show happening on 29 November 2017.

At launch, the new three-row RX will be available in RX 350L and RX 450hL variants. In its five-seater configuration, the RX 350 is powered by a 3.5-litre naturally-aspirated V6 mated to an eight-speed automatic pushing out 295 hp and 370 Nm of torque. On the other hand, the RX 450h gets a 3.5-litre V6 hybrid paired to an E-CVT pushing out 308 hp and 335 Nm of twisting force. Both variants can be had in two- or four-wheel drive configurations. Expect the RX L to maintain the same outputs.

Locally, the Lexus RX is on sale with a price tag of RM389k to RM520k, all fully imported from Japan. In an era where space is everything, a seven-seater RX L should be an appealing prospect.