The Malaysian-spec Mazda CX-9 which will be launched very soon is being showcased at the Malaysia Autoshow 2017 at MAEPS, Serdang from 9th to 12th November 2017. The CBU model will be replacing the Australian-spec CX-9 which has been on sale.

The CX-9 will utilise a 2.5-litre Dynamic Pressure Turbo 4-cylinder engine with VVT, with an output of 228 hp and 420 Nm of torque, mated to a 6-speed SkyActiv-Drive transmission.

On the outside the CX-9 now comes with a host of LED lightings which extend to the headlamps, tailights, fog lamps and daytime running lights, replacing the previous halogen units – as it carries on with a set of 20-inch wheels.

What you don’t get with the Malaysian-spec CX-9 is the i-Stop system – eliminating the idle stop/start function previously found in the Australian-spec model along with the i-ELOOP system, a capacitor-based energy recovery system.

Highlights on the inside includes Bose sounds system linked to a whopping 12 speakers, the 8-inch touchscreen MZD Connect Infotainment System, an Active Driving display along with leather upholstery and a triple-zone auto climate control system. This replica engine of the Le Mans-winning Mazda 787B is every petrolhead’s dream toy! 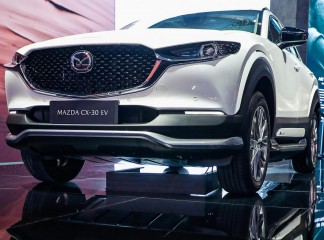