Zhejiang Geely Holding Group (ZGH) has just signed a definitive agreement to acquire 49.9 percent equity in Proton from DRB-HICOM. But how would this benefit the Chinese giant, who owns Volvo Cars, the London Taxi Company and Lynk & Co?

At the press conference, Li Shufu, Chairman of ZGH said the partnership is not just an act of outright purchase of Proton’s assets, but mainly to revitalise and reinstate Proton as a market leader. In fact, Li is keen on putting the Proton brand on the ASEAN map, not just in Malaysia. This is in line with ZGH’s plans to achieve a cumulative group sales target of 3 million units by 2020.

ZGH also intends to tap into the ASEAN market by making full use of Proton’s 30-year experience in product development and marketing. Hopefully, this will position ZGH as a major player in the ASEAN region as well as enhance their global presence and position.

To achieve this, ZGH will be sharing their technological expertise with Proton to develop a new attractive line-up as well as rebuild the brand image in Malaysia. The first model to come out of this partnership is the Boyue SUV that will rival the Honda CR-V and Mazda CX-5.

Besides that, ZGH will have access to Proton’s sophisticated plant in Tanjung Malim that produces right-hand drive vehicles. ZGH intends to help the plant to achieve maximum capacity in producing RHD vehicles for domestic use, whereas exportation comes at a later stage.

At the press conference, Li said ZGH has no intentions to penetrate foreign markets with the Geely brand for the time being. The short term focus is to up their presence in the ASEAN region.

“Proton is an iconic national brand of Malaysia. It is the symbol of Malaysia’s national achievement and industrial spirit. We hope that through our cooperation with DRB-HICOM, Proton will be transformed into the number one independent automobile brand in Malaysia and one of the top three in Southeast Asia,” said Li.

“We have every reason to expect a shared and bright future based on the values of respect, adaptation, inclusion and integration,” he added. 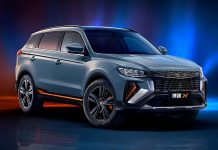