The Ssangyong Rexton once took the Malaysian SUV market by storm, and the hype went almost as quickly as it arrived. Ssangyong have made great strides with the up and coming model, codenamed Y400, to which they will unveil at the Seoul Motor Show in April 2017.

Positioned as the company’s flagship model, the large SUV is confirmed to be a seven-seater and will be powered by two engines: a 2.2-litre turbodiesel engine making 184 hp and 420 Nm of torque, as well as a 2.0-litre lump with 225 horses. A choice of seven-speed automatic or six-speed manual will be offered.

Standard equipment include LED DRLs, a massive 9.2-inch touch-sensitive infotainment screen with Apple CarPlay and Android Auto compatibility, additional 10.1-inch screens mounted behind the headrests of the front seats as well as individual “captain seats” with massage function. Yup, this one’s not fooling around. There will also be electric sidesteps (like the Range Rover!) with mild illumination for convenient ingress and egress.

Ssangyong also revealed that the wheelbase is a massive 120 mm longer than the Fortuner’s, potentially giving it a roomier cabin. The best part is, when it’s introduced to the Indian market, the new Rexton will most likely undercut the Fortuner by a full RM34,000. Now that’s an irresistible bargain. 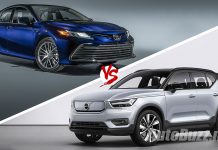