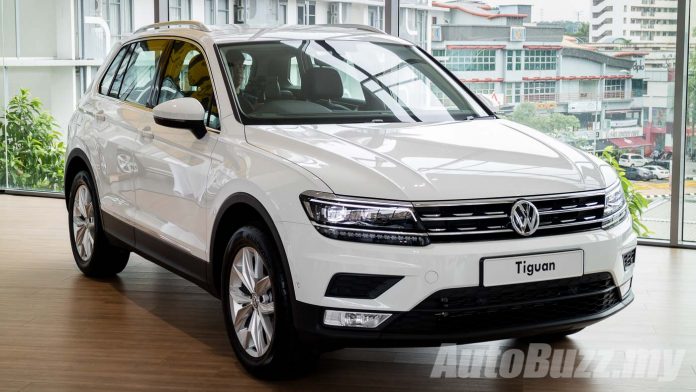 Volkswagen Passenger Cars Malaysia (VPCM) will be kicking off the year with the launch of the second-generation Volkswagen Tiguan. While we’re just weeks away from the launch, the company invited the press over for a special viewing of their CR-V rivalling SUV.

The Tiguan will now be locally assembled at Volkswagen’s production plant in Pekan, Pahang, and will be offered in two trims – Comfortline and Highline. Its estimated price tag starts from RM149k for the Comfortline and RM169k for the Highline. Pricing is of course not finalised, but expect minimal, if not no changes to the asking price.

Thanks to the enlarged dimensions, the designers at Volkswagen adopted a bolder and more utilitarian approach to the car’s design. While it may look boxy to the eyes, the new Tiguan’s final design was developed in a wind tunnel, resulting in a reduction of overall air drag by as much as 40 percent.

The Comfortline loses out on some of the aforementioned features including the powered tailgate in favour of bi-xenon headlamps, black roof rails and 17-inch “Montana” alloy wheels.

As with any Volkswagen, the cabin is a familiar place, save for several additional features. In the Tiguan Highline, it comes with “Vienna” leather upholstery, three-zone ‘Climatronic’ air-conditioning, 12.3-inch Active Info Display, paddle shifters, powered driver’s seat with memory function, 8-inch “Discover Media” with navigation, reverse camera and ambient lighting.

The first-generation Tiguan was actually offered with a 1.4-litre and 2.0-litre TSI engines. However, the new one here will only be available with a 1.4-litre turbo, producing 148 hp and 250 Nm of torque – figures that are identical to the Jetta and Golf TSI.

However, transmission here is a six-speed dual clutch DSG transmission (wet clutch, same as the Golf GTI and Passat Highline). Power is sent exclusively to the front wheels. However, VPCM is not ruling out the possibility of introducing a 2.0-litre TSI variant and all-wheel drive 4MOTION option.

A total of five exterior colours are available with the new Tiguan – Pure White, Deep Black, Atlantic Blue, Tungsten Silver and Indium Grey. You can now place your booking at all authorised Volkswagen dealerships, and early birds will receive a rebate of RM7,000. Also, for those who are interested to view the Tiguan in the metal, it will be displayed at the Volkswagen Sales Tour happening at 1 Utama New Wing from 1 March to 5 March 2017.