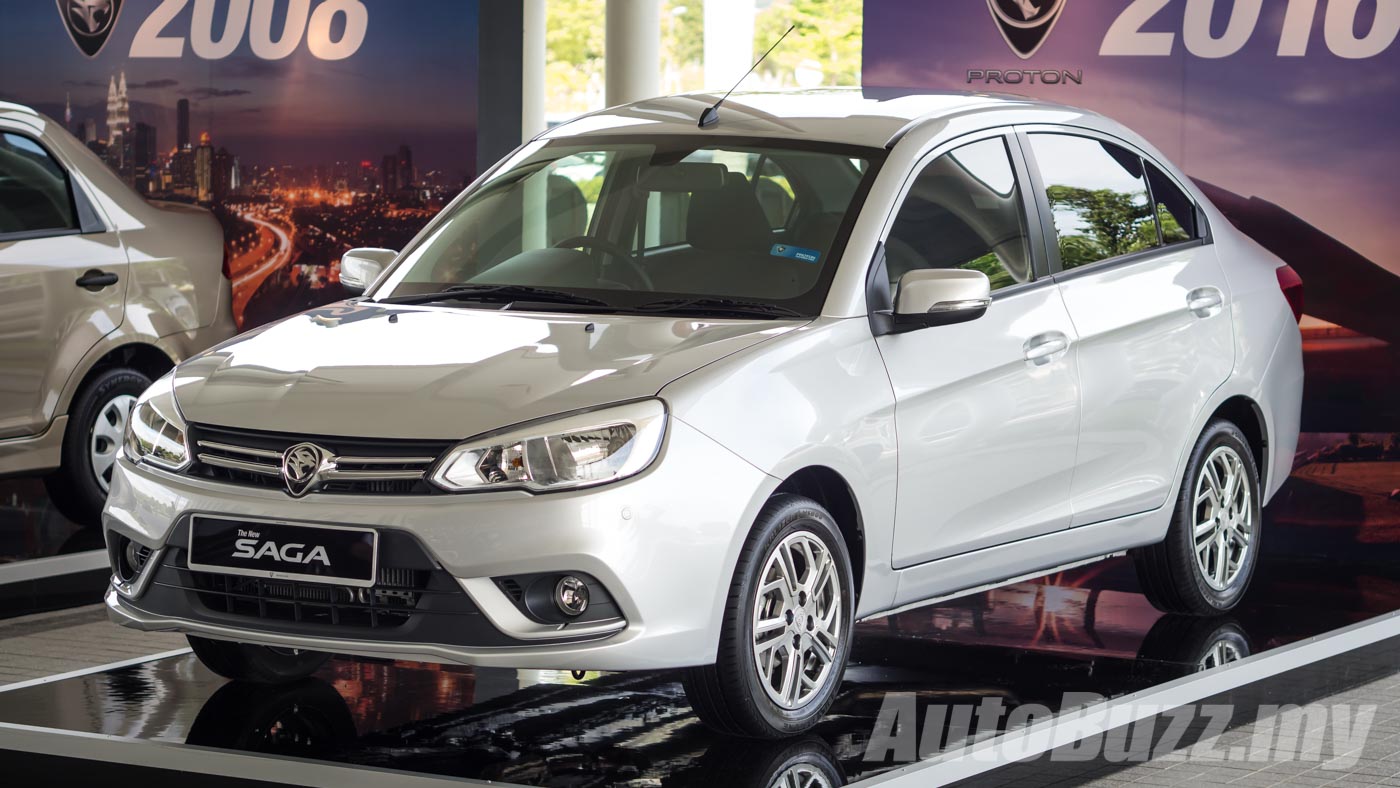 With a model life spanning 31 years, the Proton Saga you see here is now in its third life cycle, and is repositioned as an A-Segment sedan to take on the Perodua Bezza. It is available in four trims (exactly like the Proton Persona) – Standard MT, Standard AT, Executive and Premium.

If you think this Saga looks familiar, that’s because it shares the same chassis and body as its predecessor, though largely redesigned to complement Proton’s latest product portfolio. As a result, the Saga is 74mm longer (4,331mm overall length),  9mm wider (1,689mm) and its height is reduced by 11mm to 1,491mm. Wheelbase is exactly the same as before, at 2,465mm.

The range topping Premium is the only variant to be fitted with 15-inch alloy wheels that’s wrapped with 185/55 series tyres. It’s also the sole recipient of a chromed rear garnish and reverse camera. One trim down is the Executive which rides on 14-inch alloy wheels (185/60 tyres), whereas the Standard variant get 13-inch steel rims with 175/70 rubbers. Only the Executive and Premium variants get a rear spoiler as standard.

The seats are draped in grey fabric, contrasted by a dashboard finished in a darker shade of grey. In place of the driver seat is a tilt-only polyurethane steering wheel, but this time it is nicely contoured so as to fit your palms better while driving. The Premium variant is the only one to come with a steering wheel with integrated switches that control audio volume, toggle driving information and even answer phone calls via Bluetooth connection. Others won’t even get audio controls.

New additions to the Saga include dual rear USB ports for charging mobile devices (1.5A and 2.1A outputs), six cup holders, powered windows (all four doors) and ECO Drive Assist. Speaker count amounts to just two for the Standard, whereas the Executive and Premium will both get four speakers. Regardless of your choice, the rear bench can be folded down in one configuration only, but it won’t fold completely flat.

Lastly, the Premium comes with a Double DIN head unit while the rest make do with a Single DIN system. All variants however, support Bluetooth connectivity, USB and auxiliary inputs, radio, CD, MP3 and iPod/iPhone audio playback. Neat.

The Saga is powered by an Iriz-sourced 1.3-litre four-cylinder engine with variable valve timing, outputting 94 hp at 5,750 rpm and 120 Nm that peaks at 4,000 rpm. This engine replaces the IAFM+ lump of yesteryear, and adopts the same three-point mountings as the Persona for better NVH (noise, vibration and harshness).

Power is delivered to the front wheels through a five-speed manual or CVT, the latter benefitting from an improved TCU which reduces the unpleasant droning noise and gives it a more responsive acceleration. Proton claims the Saga CVT will consume about 5.6 litres of fuel per 100km travelled (5.4l/100km for the five-speed MT), but this is based on a constant cruise at 90km/h. Comparatively, the Bezza 1.3L is rated at 4.5 litres per 100km.

Approximately 60 percent of the second-gen Saga’s mechanical components have been carried over. Though the chassis remains the same, revisions such as new dampers, springs and more interestingly a front strut bar (this is standard across all variants) help keep stability in check. If anything, the Saga’s dynamics are a tad more superior now than before, as observed during our brief test drive at Proton’s private test track. Its hydraulic power steering is slightly quicker (and more assistive) as well – 16:1 as opposed to the old 20:1 setup.

As for the safety kit, the Premium variant is equipped with ABS with EBD, Brake Assist, ESC, Traction Control and Hill-hold Assist. The Executive gets just ABS with EBD, however the Standard variant gets all these passive safety features omitted. Standard safety features are dual front airbags, Isofix mounts and audible seatbelt reminder (driver-side only).

Also, Proton is offering a complimentary tint film for Premium buyers only.

So, what do you think of the new Proton Saga, dear readers? The Saga is part of a four-model launch this year, with the Ertiga scheduled for arrival sometime in October.