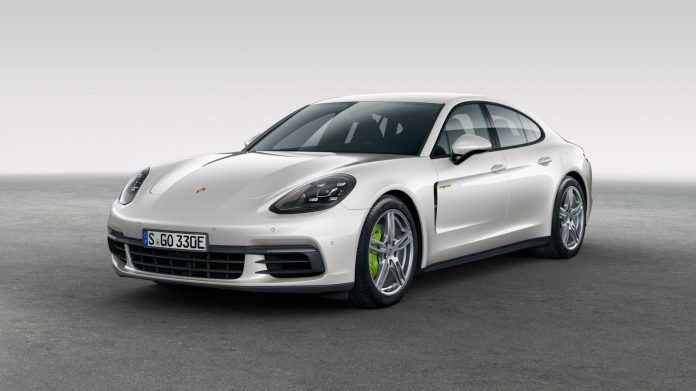 When the second generation Porsche Panamera broke cover, it can be had with the S, Diesel S, and range topper Turbo variants. A key way of keeping up to competition is by having a cleaner variant. That brings us to Porsche’s latest addition, the Porsche Panamera 4 E-Hybrid, which will be introduced at the Paris Motor Show later this month.

To begin, the Panamera hybrid is a massive improvement over its predecessor. It’s more powerful, courtesy of a 2.9-litre Bi-turbo V6 engine, combined with an electric motor that together put out 462 hp and 700 Nm of torque. The new model follows the same playbook as the 918 hypercar; the electric motors deliver power the moment the accelerator pedal is stepped. Previously, the throttle needs to be 80 percent engaged to deploy the electric motors.

To make way for more grunt, an eight-speed twin-clutch PDK gearbox replaces the predecessor’s slushbox. Power is delivered to all wheels instead of just the rear wheels.

New to this Panamera are additional (and exclusive) driving modes, such as “E-Power”, “Hybrid Auto”, “E-Hold” and “E-Charge”. By default, the car will operate in pure electric “E-Power” mode, while “E-Hold” will allow drivers to hold the current level of battery charge. “E-Charge” is pretty self-explanatory, and “Hybrid Auto” mode extracts the best out of the engine and electric motor for improved efficiency. Overall, it can travel up to 50 kilometers on pure EV mode alone.

There are of course the usual “Sports” and “Sports Plus” modes. If selected, the latter will propel the Panamera 4 E-Hybrid from standstill to 100 km/h in just 4.7 seconds, and will continue to reach a top speed of 278 km/h. This mode also recharges the battery as quickly as possible with the assistance from the engine. This Panamera may be the slowest sprinter of the lot, but that’s a fair compromise considering its newfound frugality – a whopping 2.5 litres per 100 km!

Porsche claims that a standard 3.6 kW charger will fully charge the Panamera’s liquid-cooled lithium ion battery in 5.8 hours. The optional 7.2 kW charger will cut charging time by 1.2 hours to 4.6 hours over the standard charger.

Delivery of the Porsche Panamera 4 E-Hybrid will begin by April 2017 (Europe only). A few years ago, Porsche Malaysia did offer the older Panamera S Hybrid model. If only there’s a way of getting the new model incentivised…