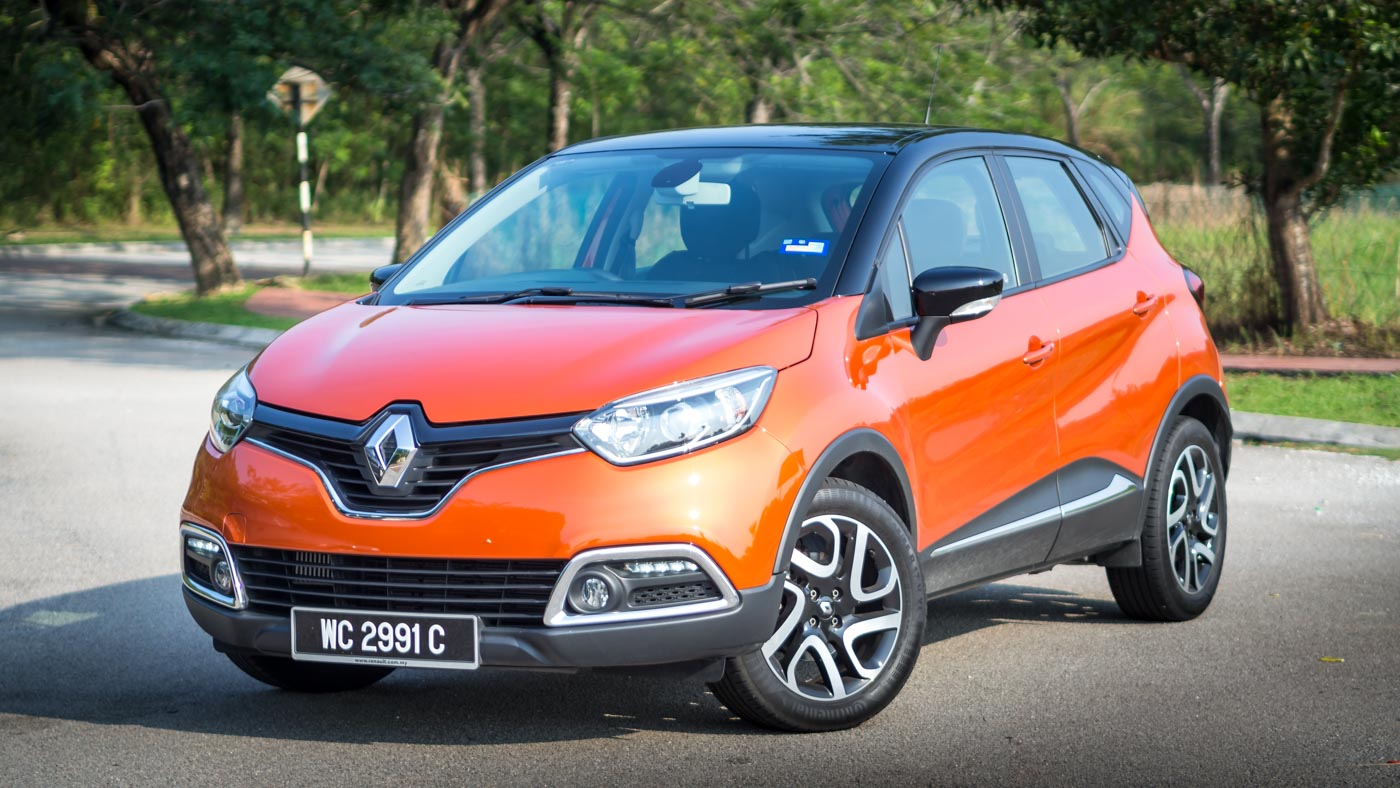 Compact crossovers have been making waves on our shores of late, with the Honda HR-V leading the segment sales chart, while the Mazda CX-3 continues to build up its presence on our roads. The Renault Captur has achieved similar success in European markets, being the best selling compact crossover in a segment that has grown 30 percent in the first quarter of 2016.

With a proven winner in hand, TC Euro Cars have decided to bring in the contender and take the fight to its Japanese rivals. Question is, does it have what it takes? To find out, we took the Captur out for a spin, and here’s what we think of it.

The Captur may be mistaken as the Clio at first glance as it sports the distinctive front end and the large vertical diamond that is part of the Renault’s design language. Free-flowing lines add curves to the car, which in turn bulks up its appearance. Subtle application of chrome detailing on different parts of the car adds a touch of class to it, while the black plastic cladding gives it a more rugged look.

Up front, there’s a pair of halogen projector headlights, with the LED daytime running lights housed right above the fog lights. Turning indicators are integrated into the wing mirrors. At the back, conventional bulbs are used in the taillights, nothing fancy but gets the job done. A rear fog light can also be found on the rear bumper. In case you are wondering, the rear door handles are not hidden like its supermini sibling.

My favourite part of the exterior is its dual-tone colours. There are two choices – Diamond Black and Ivory – for the top half of the car including the side mirrors, where it is painted from the A-pillar towards the roof, and all the way to the integrated rear spoiler at the back of the car. While the Ivory roof can only be paired with Pacific Blue for the bottom half of the car, there are three options – Arizona Orange, Ivory and Beige – to match with the Diamond Black roof.

The car rides on a set of dual tone 17-inch black diamond-cut wheels wrapped in 205/55 R17 rubbers, it actually looks quite nice if you ask me.

The Captur’s dashboard gets its design from the Clio, but the dual barrels that look like sad eyes in the Clio has morphed into a fat butterfly on the Captur. The gear selection and huge speedo reading constantly reminds me not to go over the speed limit, while other useful information can be found above it. However, I had to look up the handbook to find the buttons to scroll through the information display. It is on the tip end of the right stalk from the steering column, where controls of the wipers are.

The steering wheel is leather wrapped, the top half of it. The bottom half is glossy plastic, which is a fingerprint magnet. Buttons for the cruise control and speed limiter settings can be found on the steering. Controls for the multimedia head unit is on a stalk hidden behind the steering wheel, which I incidentally stumbled upon when my knee knocked on it.

On the center of the dashboard, you will find the MediaNav 7-inch touchscreen head unit with navigation and comes with four speakers plus two tweeters. I had no problem hooking up my phone to the system via Bluetooth, and the USB port on top of the screen makes it easier for me to charge my phone while keeping it out of sight in the closed storage compartment on top of the dashboard. The buttons to adjust the settings for the automatic climate control are right below the screen, and once I set it to Auto I can easily forget about the other buttons.

Further down, there is this slot to hold your car key card (yes, a credit card sized device that is a little too thick to fit into my wallet), and next to it is the Push Start button. Every time when I have to start the car, I have to reach down to the button, and I actually have long hands. The Eco button and the speed-limiter cum cruise-control button are next to the hand brake, and you really need to train yourself to reach the buttons without looking. All in all, the positions of the buttons seem like an afterthought to me.

Leather seats are not offered in the Captur, instead you will find removable fabric seat covers, with three different options – Ivory and Beige, Orange and Blue – to match with the shade of the car. Instead of having pockets on the back of the front seat, several stretchy strings are available to hold items that are big enough not to slip through the holes in between. Now that should prevent the back seat passengers from hiding candy wrappers in the pockets. The seats are comfortable, but I find that it lacks the lumbar support to back me through longer drives.

Rear passengers can enjoy the ample knee room, which Renault claims to be about 216mm large. The boot space of this French crossover is huge, capable of filling 377 litres of load, and can be further enlarged up to 455 litres when the back seat is folded down. Furthermore, the flat-foldable rear seats and the slidable bench creates different spaces to meet different situations. Another clever feature that is worth mentioning, is the adjustable boot floor that can be raised to sill level, creating a hidden compartment to conceal things from prying eyes.

To satisfy the power-hungry Malaysians, TC Euro Cars brought in the most powerful Captur Renault has to offer – the Renault Captur TCe 120 EDC.

This compact crossover is powered by a 1.2-litre turbocharged four-cylinder direct injection petrol engine. Renault calls it the Turbo Control Efficiency (TCe) engine and claims that it uses F1 technology to make it both powerful and frugal.

There is also an ECO mode to please environmentalists, which the manufacturer claims will modify the vehicle’s performance characteristics and reduce fuel consumption by up to 10 percent when activated.

I was not expecting much from the car after reading the spec sheet but I was surprised how good it drives from the moment I stepped on the accelerator. On the highway, the Captur feels steady and composed when driven at speed limit (with the help of the speed limiter). Overtaking is also a breeze as peak torque comes as low as 2,000 rpm and the car is supermini light.

When ECO mode is activated, the car immediately feels like it has lost some power, and the climate control automatically adjusts the temperature to a warmer setting. Eventually I had to press the accelerator harder and downshift to maintain the power, which actually defeats the purpose of the ECO mode. The best time to use this is when you’re not in a rush when driving in the city, and this helps soften irregular throttle modulation cars typically suffer in stop-and-go traffic.

Gear shifting is smooth and you get that distinctive shifting sound from dual clutch gearboxes. The automatic gearing ratio is tuned for fuel economy so I prefer to shift the gears myself via the shift stick. It is a pity that there were no paddle shifters equipped. The infamous jerky shifting of dual clutch gearboxes is not obvious, but that doesn’t mean that the car is free from it.

Ride is smooth and the suspension is tuned more for comfort, so I was not prepared for the amount of body roll as I was exiting the highway into a steep curve while carrying some speed. It was then I realise  that I wasn’t driving a supermini, but a compact crossover instead!

The only gripe I have with the car is its steering during parking, which I think is important for a car meant to be used mostly in the city.

Everyone seems to want a compact crossover nowadays and we have some good options to choose from. If you are in the market and have not been swayed by either the Honda HR-V or Mazda CX-3, then it is worth your time to seriously consider the Renault Captur.

The Captur is like the middle child of a three-sibling family, where the eldest always sets the expectations and the youngest gets all the attention. However, we have always overlooked the fact that the middle child is usually the quiet achiever. Once you take a closer look at the Captur, you will know what I mean.

The HR-V has ticked most of the boxes on the checklist of Malaysian buyers seeking practicality and space in a small package. On the other hand, the CX-3 has met the expectations of those after an engaging drive, while looking cool at the same time.

While the HR-V and CX-3 combine a B-segment platform with a C-segment powertrain, the Captur opts to retain both the platform and the powertrain from its B-segment sibling, the Clio. As a result, the Captur does not differ much from the Clio in terms of dimensions, and it is lighter too.

The Captur has a tough fight in its hands, so let us examine whether it can capture the middle ground with what it has to offer.

The compact crossover is a new segment that tries to attract the younger urban generation. For someone who is approaching middle age and grew up in a rural area where a car means four doors and a boot, this car is really not my cup of tea. Rather, I would get a supermini for my city commute and a proper 4-wheel-drive for my off-road excursions. For everything else, there are always rental services when I need it.