Last week, Tesla Motors unveiled the much-anticipated Model 3 electric car (EV), one which we believe created or emulated the “Apple Hype”. About seven days later, the order books for the Model 3 stands at a mind-blowing 325,000; proving that everyone, including your relatives, colleagues, and even your neighbourhood barber, would want one parked in their garage.

The Model 3 is billed as Tesla’s most affordable model and will become the company’s cash cow with $14 billion sales (approx RM55 billion at current rates) generated for this $35,000 EV (approx RM140,000). Amazingly, the company has already raised $325 million without advertisements or through paid endorsements.

Numbers wise, 117,000 orders were placed prior to the launch, with 276,000 additional orders received three days after its unveiling. That said, it’ll be a really long wait if you want to get your hands on one because the first Model 3 will only be rolled out of the factory latest by end 2017. However, the good news is the $1,000 booking deposit is refundable for those whose patience fall short of Yoda’s.

In anticipation of the growing demand, Tesla is pushing the envelope in preparing the infrastructure to support its EVs. This includes pumping 500,000 batteries a year from its upcoming “Gigafactory” and adding more Tesla Superchargers across the globe.

Meanwhile, automotive commentators are raising doubt on Tesla Motors’ capabilities of delivering the Model 3 on time due to the company’s recent problems with the Model X’s production. Should Tesla Motors pull through, not only will they become a true game changer for the motoring industry (after Ford introduced the Model-T, of course), but also generates quite the excitement for transportation technology as a whole. 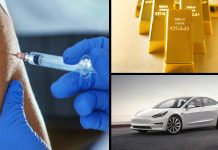