The Land Rover Defender, an iconic off-road vehicle that is recognisable just about anywhere in the world, has reached an important milestone after the final unit of Defender rolled off the production line in Solihull. This marks the end of an era for the Defender after 68 years of production.

To celebrate the occasion, 700 current and former staff of the plant gathered to witness the Defender 90 Heritage Soft Top model rolled out from the production line. That unit was in fact, the 2,016,933 millionth Defender built within the confines of Solihull which has been in existence since 1948. Despite that, it’s not all gloom and doom as Jaguar Land Rover is developing the next generation Defender that is set to carry the same mantle as its predecessor.

The Defender was not known as the “Defender” when it left the factory in 1948, instead, it was known as the Land Rover Series. Inspired by the Willys Jeep, it had undergone three iterations (or series) of evolutions before being rebranded as the Defender in 1990. Over the years, the Defender and Series models have shaped the world like few others, be it for exploration, ferrying soldiers into the battlefield or providing transport in paths no ordinary vehicles could traverse.

The Defender/Series has had a colourful presence in Malaysia. Our police force used them as the “Black Maria”, transporting criminals to justice while over at East Malaysia, they’ve been a useful tool used to explore the dense forest of Borneo. In Cameron Highland lies the biggest gathering of old and battled Land Rovers with “CH” logo on each side of the door. These workhorses have been running up and down the hills of Cameron Highlands for decades upon decades, ferrying all sorts of things from people to harvests. In fact, read more about it here.

Farewell, good ol’ lad. You will be missed. 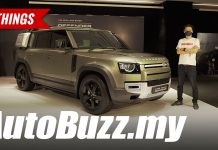