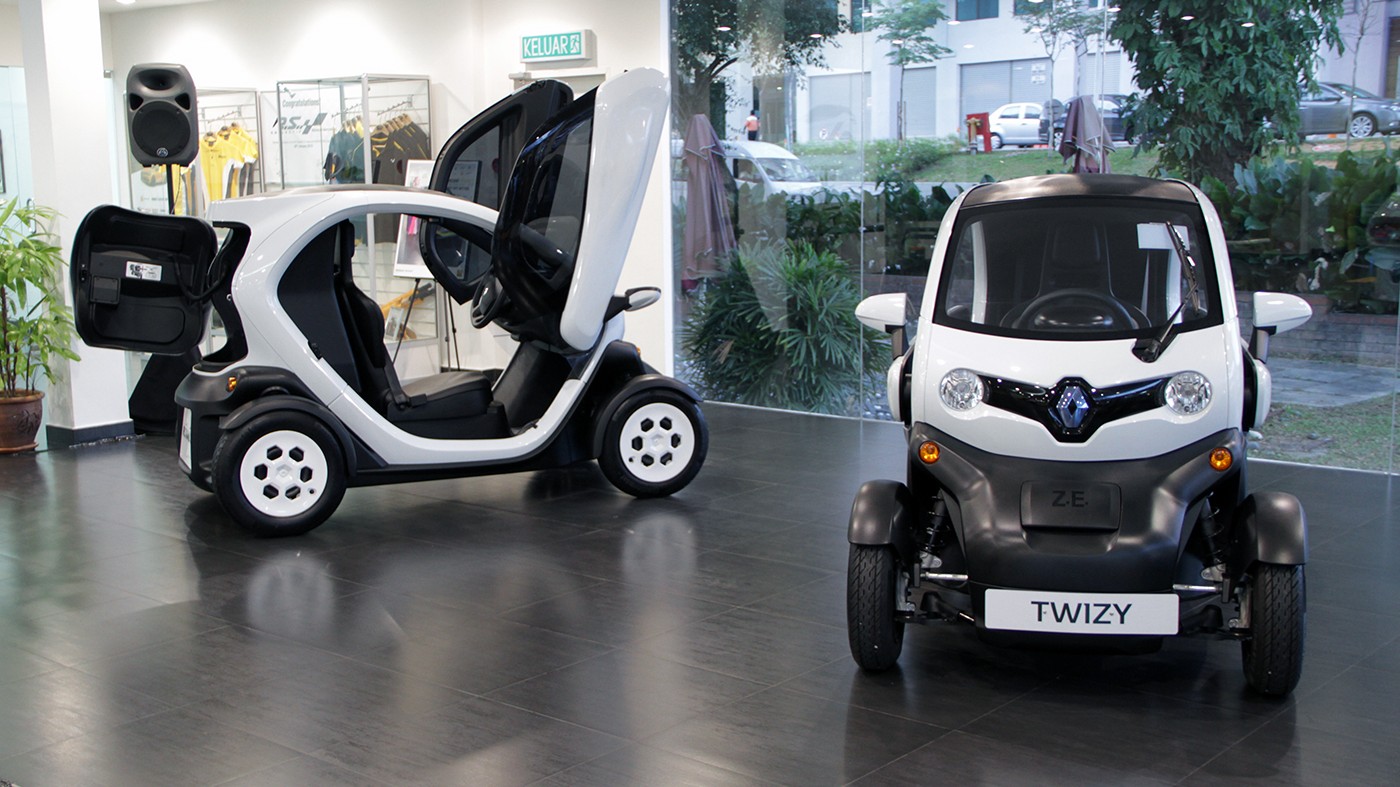 Malaysia’s sole franchise holder and distributor of Renault, TC Euro Cars has just recently launched its pure electric vehicle, the Twizy ZE. This tiny pocket-sized urban mobility mode of gettin’ around is all the rage in other parts of the world where it has sold well over 15,000 units.

Speaking of sales figures, Renault has been doing rather well in this department, where in European markets for example, the Renault-Nissan alliance has become top EV brand in the first half of this year, with a share of up to 26 percent. Here, the Twizy is available in two varities, namely the Urban and Cargo trims.

Funky would be one way we’d choose to describe this micro city-runabout’s looks. But it is a bold step forward in the proliferation of EVs in our petrol and diesel dominated market. On the face of it, it stands on all fours and measures out at just 2.34 metres in length and a mere 1.23 metres wide. So wide that, for example, should you need to measure out a snug parking spot, simply extend your arms out wide and hey presto!

The Twizy is made from a unique blend of lightweight steel frames and wrapped around with plastic panels. How safe would this be in the event of a crash, you ask? Renault has come forward by saying that the Twizy was designed with crumple zones and pedestrian safety in mind, and since the Twizy makes no noise (and emissions for that matter), you might find people inadvertently crossing paths with you.

The doors on the Twizy will appeal to the inner Lamborghini-ogling child in us when pulling back the handle because the door opens upwards. Couple that with the chic front headlights and the unmistakable Renault badge that’s displayed ever so prominently gives it all a sense of occasion. Not forgetting the tail lamps that looks like it was borrowed from Cyclops. The Twizy oozes character and personality in this department.

Starring down the barrel of that Renault badge is a discreet flap with ZE written on it, lift it up and you will find a spiral cord hooked up to a three-pin 240V wall socket for easy charging. Round the back however, there is a 180-litre watertight truck space, but it’s only available on the Cargo variant.

Basic would be a rather rudimentary term to describe the interior of this quadricycle. No thrills and frills to be found here. There’s only a couple of stalks on the steering to work the indicators and the windscreen wiper. Move your gaze over to the left and you will find a more buttons to select drive, reverse and neutral. Next to it lies the hazard warning lights.

The seats – or seat in the case of the Cargo variant – is sturdy and molded to be adequately comfy for short commutes. The front seat is adjustable of course, to suit varying driving positions.

The little Twizy might not deliver face-ripping and electrifying Tesla levels of performance but it does come bolted with a 6.1 kWh lithium-ion battery pack that sends power to the rear wheels. The electric motor makes 17 hp at a time with a total torque figure of 57 Nm, meaning it can get up to a cruising speed of 45 km/h in 6.1 seconds. There isn’t a century time clocked, but the Twizy tops out at 80 km/h. Not bad considering that it tips the scale at just 450kg.

In terms of range, the Twizy is rated up to 100 km (on the NEDC cycle) on a full charge. Mind you, a full charge takes three and half hours from an ordinary 240V wall point. No special charging point is needed. Stopping power on the hand is delivered via disc brakes on all four corners. The handling is as-you-would-expect of a car of this nature. Go-kart like handling will be the most apt way of describing it.

The Twizy comes with an airbag for the driver should push come to shove. For added peace of mind, it comes with a two-year or 50,000 km manufacturer’s warranty. The same time frame is given for both the battery and electrical drive train. Like all Renault cars, service intervals are scheduled at 10,000 km or six months, whichever comes first. The single-seater Urban flavour comes in at RM71,888 while the Cargo version retails for RM73,888.