TC Euro Cars Sdn Bhd has officially launched the Renault Megane RS265 Cup. It may look similar to the existing Megane RS265 Sport, but underneath they’re ever so slightly different.

The Megane RS265 Cup is a step up from the Megane RS265 Sport, and for RM37k more you’ll get the Cup chassis with stiffer suspension and a mechanical slippy diff too.

The RS265 Cup is virtually identical to the RS265 Sport. It has that new Renault face with the oversized Renault badge over a glossy black grille that extends to the headlamps, and the F1-inspired wing in the lower intake that incorporates LED DRLs.

The flared wheel arches accommodate a set of 18-inch Tibor wheels hiding red brembo calipers behind, while the back didn’t change much from the pre-facelifted Megane, featuring a rear bumper with diffuser and a center-exit tailpipe, and also a reverse camera.

The interior is also not much different from the pre-facelifted Megane, and we guess Renault is planning to keep things simple in here. However, the RS265 Cup gets the latest 2.0 version of the RS Monitor, which records your driving statistics for future reference or for comparing with your other Megane friends.

A century sprint time is clocked in six seconds flat, with the help from the 2.0-litre four-cylinder turbo mated to a six-speed manual ‘box. The engine produces 265 hp and 360 Nm of torque, but that’s only part of the fun.

The independent front double-axis strut system is said to minimise torque steer, and for maximum fun, the Cup chassis provides stiffer and sportier suspension setup and a mechanical limited slip differential. Drivers can play around with the three different driving modes on offer: Normal, Sport, or Race. The last one completely disables the ESC.

The Megane RS265 Cup comes with a three-year or 100,000 km manufacturer’s warranty. There are four colours to choose from: Pearl White, Oyster Grey, Diamond Black, and the trademark Sirius Yellow; but you have to fork up another RM7,000 for that signature colour. 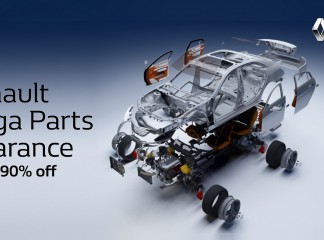