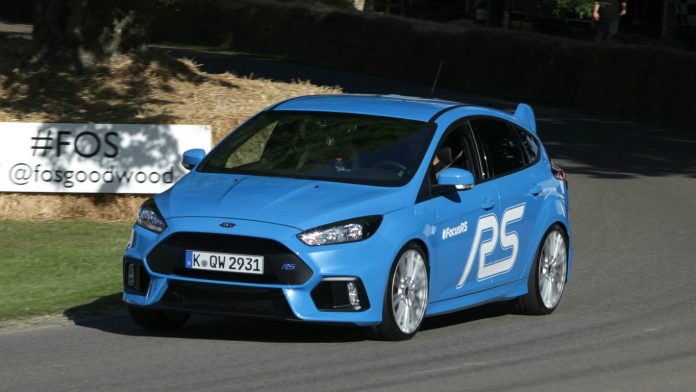 At the recent Goodwood Festival of Speed, Ford revealed the Focus RS, one that was co-developed with Ken Block who described the hot hatch as being on another level.

This hatch certainly has its work cut out with stiff competition from the Deutchland duo – the 280 hp Volkswagen Golf R and the beastly 381 hp Mercedes-Benz A45 AMG. The plucky Brit (we say Brit, but it’s made in Germany, oddly enough) is powered by the new 2.3-litre EcoBoost four banger that’s also shared with the Mustang.

Ford hasn’t gotten around to releasing the full spec sheet of their most focused Focus, but the motor has been significantly upgraded for the Focus RS to deliver 10 percent more power with 345 hp maximum output as opposed to the 310 horses of the Pony’s. Torque figures stand at 440 Nm, however the Overboost feature will push it up to 470 Nm, just 5 Nm shy of the A 45 AMG.

The significant go factor here is attributed to the new redesigned, low-inertia twin-scroll turbocharger unit that utilises larger compressors for greater air flow. Cooling is a matter of precedence when dealing with wacky output figures. A much larger intercooler is in place to maximise the charge density. The engine also breathes better through an enlarged and less restrictive intake design which makes for a deep throaty induction sound. The RS just wouldn’t be complete without a high performance exhaust system that comes with an electronically controlled butterfly valve that helps optimise back pressure.

Putting all that power down on the road requires some serious machinery, which is why the six-speed stick shifter co-developed by racing transmission gurus Xtrac is fitted as standard on the RS. Thereafter, power is divided onto all fours via a trick non-Haldex type AWD system that employs Dynamic Torque Vectoring technology, which basically means that the power can be divided up to 70 percent to the rear wheels.

Now here’s something you would typically find in Need For Speed instead of a car. The Focus RS comes with a driving selector, one of which is labeled as Drift Mode. Befitting isn’t it, considering that the hatch was unveiled by Ken Block himself. The madness doesn’t end there. There’s also a Launch Control feature to go against the said German hatches.

Ford’s performance division has revealed that the Focus RS is one of 12 new hot performance models that will rolled out globally through to 2020 as part of Fords new direction. Needless to say, watch this space for more updates.